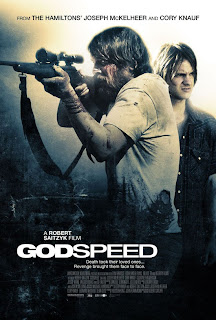 A faith healer barely is making a living in the wilds of Alaska . He withdraws into himself after his wife and child are killed by intruders to his house. He meets a young woman with whom he makes a bond. She eventually takes him home to meet her family and things become deadly.

This is a good but not great film. The Alaskan locations make a nice background for the story of a group of people lost in their own personal wilderness. The cast is pretty good and is nicely balanced. The trouble with the film is that some of what happens once everyone ends up at the girl's home is a little odd. Its hard to explain what actually bothers me with out giving too much away, but I find the motivation and the head space of two of the characters a little odd. Its not bad, but I found it hard to fully connect with the characters the way I probably should. It also makes some of what happens a little hard to fully accept.


Having said that I have to say that I like the film; I don't love it but I did like it. It's the sort of film that hovered around the edges of my psyche after it was done. Would I recommend it if one had to pay full price in the movies, probably not, but I think that if one wanted to see a good, decidedly not your typical Hollywood film, one should give this a shot on home video or on cable.
Posted by Steve Kopian at September 21, 2013