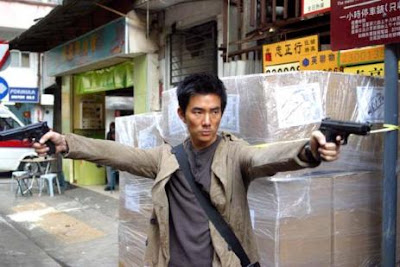 This is the film where I first noticed Johnnie To. This is the review that I posted at IMDB right after seeing the film.

After a shoot out goes wrong and the police are made to look like fools, the brass resolve to catch the bandits while using the media to fix their busted reputation. However things don't go quite as expected for anyone and what was a simple manhunt becomes a hostage situation with all of Hong Kong watching.

This is an odd film. The plot is a bit too complex for its 90 minute running time, with gunfire exploding often when you least expect it. It starts off with a huge shoot out and then changes feels and tones several times as it goes. And there are a couple of moments where I swear I missed some plot point or other, but found I was simply carried along with the momentum and didn't care for long..

It clearly wants to make a commentary on the use of media by organizations to look good, and it mostly succeeds. (I'm also certain that the parallels to how the US Government is doing a similar thing in Iraq was probably unintentional even if it does make you think.)

This is a very good, and very off beat film that moves to its own beat. Definitely worth seeing, especially if you like action.