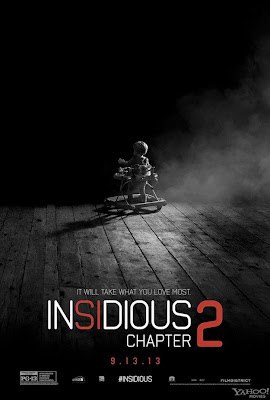 "What do you think of this?"

- An exchange between the Lambert sons in Insidious 2 which states my feelings about the film.perfectly.

A couple of months after James Wan climbs to the pinnacle of American horror with THE CONJURING he jumps off the peak and crashes through the sidewalk into the depths of  mediocrity with INSIDIOUS CHAPTER 2. As much as I've had my reservations about all of Wan's films including the first INSIDIOUS, I have admired that he's gotten better with each film. Sadly this time out you would swear it was made by the least capable of the SYFY horror directors...okay it's not that bad but considering all the good that Wan has done before its that bad since this is easily his least film.

Starting back in 1986 when Josh (the Patrick Wilson character) was a boy and still suffering from nightmares we see the events that directly lead to Elise to hypnotize him so he forgot he could travel to the dark world. The film then jumps forward to the morning after the events in the first film as the police investigate Elise's death and the Lamberts move in with grandma (Barbara Hershey). Weird things continue to happen of course since the real Josh was trapped in the dark world and a spirit is in his body. What follows alters what we think of the first film as new rules are created (seemingly on the fly), we see old events with new "insight" (I use that term very very loosely instead I should have said WTF confusion) and all logic and reason gets thrown out the window...which reminds me why doesn't anyone who's being chased ever go out one of the windows...but I'm getting ahead of myself.

This movie is laughable. I wish you all could have been there and heard the audience roaring with laughter, sometimes at the intentional humor, most times not. I don't think anyone was scared, the crowd I filed out with said they weren't scared and were happy they didn't pay for it (The screening was filled with press and people who seemed to have won tickets).

The troubles begin at the very start when we see an actress playing a younger version of Elise, the medium that helps the Lamberts. She is badly dubbed by Lin Shayne who plays the older Elise so the film instantly feels off- especially since none of the other younger characters are dubbed. It feels like we're watching a badly dubbed Italian horror film from the 80's.

Then as events begin to transpire in 1986 you can feel the hand of the writers retrofitting new material on top of old. The retrofitting continues into the now when the spirits (there are 2 which in context makes no sense) we thought were haunting Josh turn out to be something else entirely - actually all I'll say is that there is some effort to start a Elm Street like franchise at work.

As the story progresses logic and reason go out the window (I know I'm repeating myself) as the film takes great pains to force the film go where they want it to. I could list all of the WTF moments in the film but I'd have a straight recounting of the plot which you don't need.Instead I'll list a few of the spoiler filled head scratchers beginning with the very real question of why doesn't anyone go out the window when chased, we could move on to how could the spirit that is in Josh show up in a different form in the dark at the same time he's in Josh?Why does the spirit attack Renai in the hall  and where is everyone that she can lay unconcious for what seems like hours and hours? How easily can the Lambert's son fall asleep? How fast does night fall or morning come in this town? Why doesn't the spirit of Parker Crane kill the three guys who try to stop him? One character dies- but doesn't- and yet crosses into the dark world? What is the deal with Parker and his mother? (That last one, is one the whole film hinges on and since it makes no sense at all the whole film collapses- and I know most of that won't make sense until you see the film)

There is more but I don't want to give too much away -actually I want to give it all away since I want you to save your money- but I know that isn't going to happen. If you go see this film take it as a given that nothing in this film makes any sort of rational sense except at its most tenuous. Things happen because Wan needs them to transpire this way to keep the film running for 105 minutes and because his direction and technique is so club footed that it uses such cliche set ups that the film has no genuine frights.

I should mention that the story is burdened with numerous reference to other better films. Wan cribs bits from THE SHINING, GRAVE ENCOUNTERS and THE AMITYVILLE HORROR to no noticable effect except to indicate how bankrupt this second trip to the well is.

This film is a mess-weirdly watchable-hell I stayed to the end- but still a mess-but never even remotely scary.

Okay let me be perfectly fair- INSIDIOUS CHAPTER 2 isn't a bad comedy. The humor in the film both intentional and unintentional works and brought the audience I saw the film with into hysterics on several occasions. I haven't seen many recent comedies that got the laughs that this film got.laughs this big. I'm not lying this film had people roaring, myself included.

As a horror film INSIDIOUS CHAPTER 2 leaves a lot to be desired. Yes it has one creepy dream sequence and it has one scare of the loud noise variety, but the film relies on such well worn scare tactics that you see everything coming well before the attempted scare arrives. Worse it has no internal logic and keeps trying to amp up the fear by simply changing the rules or altering logic. I suspect we should take comfort in the fact that the set up for the third film goes in a semi new direction but after this one I have no interest in ever revisiting the franchise.