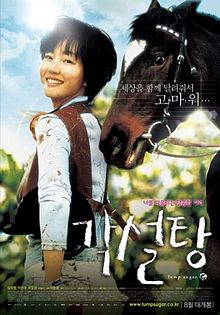 Its a sad commentary on American film viewing that most films from Asia not having to do with action or horror are completely left out of the loop. This is a very good movie that deserves a bigger audience in the States and elsewhere.

The story of the film is as follows: A girl who's mother was a jockey and who died in a riding accident, grows up with a passion for horses and a desire to follow in her mothers footsteps. Of course her father disapproves but she pursues her dream anyway.

This Korean family film is quite possibly the best looking film about horses ever made. This is a rich and gorgeous visual experience that is a joy to behold. I have never seen horses look this good. If you think horses are beautiful magical creatures this film is for you.

The cast is first rate with everyone turning in excellent performances, including the horses. I don't know if its clever editing or if the film makers got some remarkable horses but there are times when the horses seem to be keeping up with the humans on screen. Just watch the early scenes between the young version of our heroine and General, one of the horses, its a dead heat as to who is giving the better and more charming performance.

The story is equally good even when it moves into clichéd territory  when it hits the the expected ones about about a girl and her horse. At the same time the film takes some atypical turns with some darker happenings that most western films would never touch (its not always happy).

I really liked this movie. How much? I had picked this film up with the intention of taking a quick look at it before handing it to a horse loving friend...well they aren't getting it, except as a loaner.

Not perfect, but definitely worth a look.
Posted by Steve Kopian at September 19, 2013