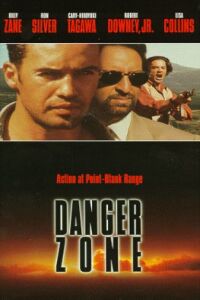 Robert Downey Jr arrives at Billy Zane's camp in Africa wanting to dump some toxic waste. Zane refuses, more so when the army arrives and begins to shoot up the place, killing Downey in the process. Zane escapes, fleeing to New York where he is talked into returning by Ron Silver who tells him there is more afoot then meets the eye. A "B" level action adventure results.

Pay check movie for the cast (some of which looks drunk or stoned) is an okay time killer for the rest of us. Entertaining and worth a bucket of popcorn when you're in an undemanding mood, this is the sort of B movie that would have played in grindhouses a couple of decades ago.

Zane is good as the hero, even if he looks a bit bored. Downey's role, though figured prominently in the cover art is rather small, which only goes to show that even in a down phase, once you?re a name you still can attract people.

I liked it, but I wish I had seen it on cable on a rainy afternoon instead of watching it VCD late on a Sunday night where the break in the film made me have to choose to continue (I did switch discs).

Worth a look if you stumble on it and want undemanding action.