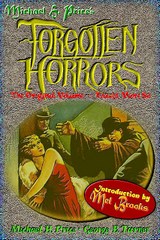 If you don’t already own the Forgotten Horrors series you need to buy them all- which at this point covers 7 volumes with another in the series on the way and there are several related titles also floating around. The books are a source for information on films with horrific elements, but for the most part aren't considered horror films from all through the sound era.

The series was started by George Turner and Michael Price back in the 1970’s. When Turner passed as they were preparing the second volume Price picked up the torch and finished the second volume using notes that were left behind. The third volume had less of Turner’s work and was almost all the work of Price and a little bit of the work of John Wooley. Wooley took over co-authorship with volume 4 and Jan Alan Henderson was added for volumes 5 and 6. (As I write this a volume called Forgotten Horrors to the Nth degree has also been published that has related articles that the authors had published in Newspapers, Fangoria magazine and other outlets over the years. Additionally Volume 7 is on the way)

I’m not going to go into the publishing history of the series (each of the early volumes have been revised several times and appeared as a couple of different publishers.) I’m just going to talk about the books.

Beginning with the coming of sound the series charts the films, most B or Z grade films that have something in them that could be considered horror like in their make-up, setting or plot elements. Are there old dark houses, mad killer? Rampant animals? Nightmares? Hellish tortures? Dark streets? Crime? Then maybe a film could be considered a horror film.

For example in Volume 2 we have UP IN THE AIR the Frankie Darro Mantan Moreland comedy mystery or in Volume 4 we have one of the Joe Palooka boxing films. We see get looks at the entire monogram Charlie Chan series, several Republic serials. Westerns mix it up with comedies. There are even a few kids films. The recently published volumes 5 and 6 deal have a large number of science fiction films as science fiction about UFOs, space ships and atomic energy pave the way for the resurgence of horror in the late 50’s.

It’s a massive and authoritative collection of titles that the authors have been updating over the years with older editions of volumes 2 , 3 and 4 containing updates for the earlier volumes- though now that the books are being published by Cremo the whole series is being revised and updated.

The joy of the books isn’t so much that they list hundreds of titles you probably never considered as horror, assuming you even knew they existed, rather it’s the way the entry on each film highlights not only the making of each film (something one would rarely expect for many of these B film) but it also give a view into the growth of the various genres, studios and viewing habits of audiences. Let’s face it the books are not only a guide of the various films, but they are also a social history of film. Rarely if ever have I ever run across a film reference guide that talks so much about audiences and social trends as much as the Forgotten Horror series. Sure I've seen the odd volume about film going or audiences but never have the film going been woven into the story of the films themselves as they are here.

If you love movies you need to have these books. They will point out things you never knew you needed pointed out say an odd story about a certain cowboy avtor shooting someone outside of the drug store where all the actors hung out. I go backwards and forwards through these books constantly because I keep learning stuff and finding new titles. Usually I’ll see a film and try to find something on it. When I exhaust the usual suspects I’ll pull out these books and go through them – often ignoring say the Phil Hardy Overlook Film Encyclopedias (because they are too god damn big) No they don’t have everything- just a lot of the offbeat stuff that I am frequently watching.

Volume One- (at least the volume I have) starts in 1927 and goes on to the mid 1930’s. It sets the stage for the series and has a good number of films that end up referred to in later volumes.

Volume Two Goes from the mid 30’s to the late 30’s It’s a wonderful continuation of the series.

Volume Three takes us into the 40’s. This isn’t quite as good as the earlier books but I suspect that this is because the film industry was changing.

Volume Four is the weakest of the books. Taking the series to the end of the 40’s the book is reaching for material to fill out it’s pages. While I initially dismissed the book in a review on Amazon, I’ve softened after not looking at the book for several years. Its not that the book is bad, it just has shitty films to work with.

Volumes Five and Six are amongst the best as the quality of films returns and the notion that many are forgotten horror is easily seen.

Additional volumes are planned that will take the series up to the 1980's and the first direct to home video film.

As some one who has literally hundreds of film books these are amongst the treasures of my collection. They are a source of constant joy because they continuously reveal things abut film and films I never knew. For example in their discussions of the work of W Lee Wilder you end up getting a discussion of his brother's work Billy. There is also frequent discussion of the where the various actors and directors ended up so see how the great ones started or fell. And everything is supplemented by tons of interviews, in all seriousness I don't think you can go more than three pages in any of the books with out some direct quote from someone in one of the films.

I can't say enough good about the series nor is it possible for me to fully explain what treasures are hidden in the volumes. The reason I keep going back and forth through the books is that I keep finding new things in them or stumbling upon new films that only they reference.

You must plunk down the cash and get the entire series. Its truly one of the best film references you'll ever run across.
Posted by Steve Kopian at September 01, 2013