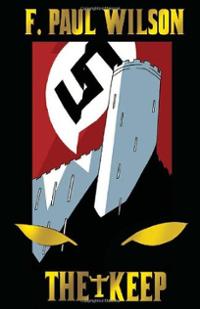 Way back when the film version of F Paul Wilson’s The Keep came out, writer director Michael Mann said that he felt that if he didn’t make movies he was embarrassed by he wasn’t learning anything as a filmmaker. Considering that the film is never mentioned by him he really must be embarrassed.

Wilson, the writer of the novel really dislikes the film a great deal. To him it was a missed opportunity.

For the 30th anniversary of the novel Wilson wrote the script for what he considers the real film version for The Keep, a graphic novel adaption.

Having read it I think the film that could result from it would be a blast.

Okay yes I know a graphic novel isn’t a film, but trust me if you read Wilson’s work it will remain in your head as a movie ever after.

For those unfamiliar with it, the graphic novel tells the story of a bunch of Nazi’s tear assing through Romania. They come to a small village and decide to bunker down in a strange keep in a small valley. The trouble is that in a quest for what they think is a hidden treasure they unleash an ancient evil. In typical Nazi fashion they bring in a crack bunch of soldiers to fight the evil. and as much as it pains them, they drag a Jewish scholar and his daughter into the mess in the hope of unlocking the ancient writing. What happens from there is a battle of wits as the evil makes a deal with the scholar and the enemy of the evil returns to finish off the thing he locked away.

It’s a scary ghost story where the fate of the world hangs in the balance.

The graphic novel is a wonderful adaption of the novel. Wilson himself admits that he had to make changes to get it to work as a comic, and as a result he kind of understands a small bit of what happened when the film was made. (He still doesn't understand the radical changes like the bad guy going from a human being to a guy in a blue rubber suit). Within the pages of the comic we get great characters and wonderful explanation of what is going on and who everyone is, Things which are missing from the film as it exists.

Wilson says in the graphic novel is the film that he would have made had he been able to do so, and when you read it, which you should, it will play out like a movie. The art by Matthew Dow Smith is very cinematic and you can easily accept that all of the art is story boards for some great lost film.

What I like about the graphic film is that it plays very much like an old Hollywood movie but with sex and violence. The hatred between the two super beings is real. Their show down in and around the keep is much like a swashbuckling affair that Errol Flynn might have had if Basil Rathbone played a centuries old monster. I like that  the characters have a complexity and a frailty that you don't see in most films, let alone horror films (the bad guy is locked up because had he been killed his opposite number would have died, or at least been made mortal.). All of that is missing from the film which is why it fails.

When I finished reading the adaptation I closed the book feeling as if I had just read,seen, one of the best films of the year. Someone , somewhere has got to pick this up and turn it into a film, it's simply just too good not to reach the big screen.

ADDENDUM- Looking at Michaerl Mann's film in light of the graphic novel.

Several months after reading the graphic novel I had a chance to see the film for the first time in probably a decade or more. I know it was the first time that I had seen the film widescreen since I saw it back on opening night (the book was one of my mom’s favorite books so we had to see it when it opened). Putting the DVD in I braced myself for an assault on my good taste…

The reaction to the film now was very mixed. It wasn’t the complete disaster that the film had become in my mind. I know that Wilson’s dislike for the film colored my feelings for the film, as did the words of several friends who have an absolute hate on for the film. To be perfectly honest the films biggest sin is that it feels like it was chopped down by half. There are no real characters, hell there is very little dialog, Who are these people? Who is Galen and the monster? No idea. Who is Ian KcKellan and his daughter? No clue. What are they doing and why? No idea. Nothing is explained, even though there is a real sense that there is a logic and reason and details hovering just off the screen.

I get the feeling that somewhere along the way they cut out all of the exposition and just went with the visuals. They are impressive, if dated, and seeing them, really seeing them for the first time in 20 plus years impressed the hell out of me. For a while the visuals kind of carried things…well until they completely threw out the exposition and completely relied on them. I mean seriously, even I, one of the most lenient guys in the world can’t defend much of the final half hour or that the mysterious artifact that keeps the monster in check is a flashlight.

To be honest there is much to hate about the film, I mean all of the exposition is gone and some of the visual choices, flashlight and 1980’s light show ending do in the good stuff (The sense of place and performances), but if you look at the film, I mean really look at the film this is a case where someone, be it Michael Mann or the studio, just cut the crap out of it to the point of nonsense. It’s worth a look for those who want to see cool set design and don’t mind films that coulda woulda shoulda.

ADDENDUM:
The Wikipedia article on the film lists the many problems with the film from an original run time of three and a half hours to the death of visual effects supervisor. I was at th BAM talk mentioned in the article and Mann did indeed say that a directors cut is no longer possible. You should read the piece yourself since it fills in details. It can be found here.
Posted by Steve Kopian at August 31, 2013