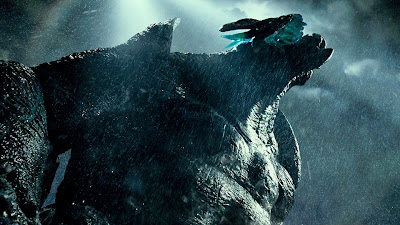 Yes I, the giant monster nut, saw Pacific Rim. I ponied up and paid the extra cash for the IMAX3D screening (actually I paid it because it was the first showing at 10am). I got my 47 gallons of Coke and my 55 gallons of popcorn and hunkered down in the front for some monster bashing.

The five year old I me loved the fights. The adult in me liked the few character development scenes. Mostly I just couldn’t believe that Guillermo Del Toro made it. I mean there is no weight to much of it. Mostly it’s monsters smash. After the first fight I was ready for something more.

It was either a great script dumbed way down, or a dumb script that had a few great scenes slipped in.

My problem is that the film is in its way the ultimate summer movie. It reduces all the action to bare basics and has just enough character scenes to keep things moving.

I’m not going to point out all of the plot holes and WTF bits (we aren’t given enough to know if they are really problems) instead I’m going to simply complain that all of the fights are at night and in the rain. Why? I was told that there is some reference as to why and I’d believe it except that we see fights not in the rain nor at night- for example the whole thing with -Mako as a child.

In all honesty it’s a great big screen special event film, but as a movie beyond that it really stinks.