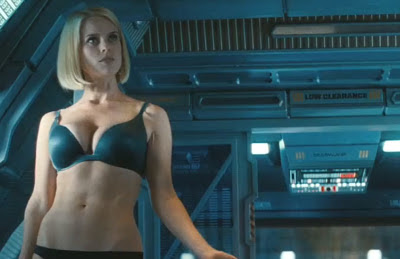 Sequel to the recent restart of the Star Trek franchise is a mixed bag of excellent parts that don't quite hang together. A better description might be this is some small  scale character scenes in between some huge scale action set pieces.

The premise of the film has a John Harrison causing all sorts of trouble for Star Fleet and the Enterprise. He's the new form of an old foe and he's going to get his revenge anyway that he can (echoes of 911).

For me the good time with old friends is less than it should be. The trouble is that instead of character development we have this huge action sequences that swallow up the small moments, and the pieces that should touch us are telegraphed way in advance, hell all one need do is to have watched several of the original films and TV series to know how things are going to go. I want to smack JJ Abrams because where he made the first film a restart and a continuation of the original series/films and thus made something truly wonderful, here he simply riffs on plot points that have gone before with references to tribbles, Harry Mudd, The Wrath of Khan and lord knows how many other episodes and series. In it's way the film is just as bad a Quentin Tarantino film with it's look how many things I can reference that you're never going to know.

While it doesn't make it a bad film, it is quite good, it simply is no where near as great as the previous film. I blame the need to have frequent large scale action sequences like every other big summer action film.

Recommended with the caveat that you know its a kind of dumbing down of the franchise.

(And is anyone else reminded of Nestor from Battle Beyond the stars by the white guys at the beginning?)
Posted by Steve Kopian at August 23, 2013