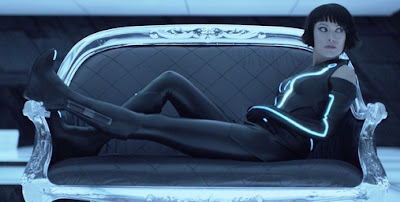 Any rational person would never have expected a sequel to Tron some twenty years after the fact. Sure the film has a vocal fan following. Sure the film ended up influencing not only films but how we deal with computers and technology, but 20 years on would anyone would crazy enough to make a sequel?

Disney was and they did.

The film takes place many years after Jeff bridges has disappeared. No one knows to where. His son ever hopeful manages to find him, living with in the computer world that Bridges had discovered in the first time. There are additional twists and turns as father and son and beautiful computer program must fight the evil over lord of the world who wants to get out of the digital world and into the real world. It’s a rip roaring adventure that builds on the first film and updates it for today’s world.

As complex as the film is, and it is deeply more complex with themes and echoes that one doesn’t expect from what was billed as a science fiction action film (actually it’s the sort of film you could do a doctoral thesis on), the reason I want to talk about the film is the music from Daft Punk, it’s amazing.

If the film works, it’s because the music is so good. Not to put too fine a point on it, it’s probably one of the best score for a film I’ve ever heard.

What makes the music so special is that not only does it set the mood and it also drives the action, but it also acts as another major character, a kind of story teller that pulls you in and drags you along. Yes I know that’s what music can do, but no film has ever done it like this. If you changed the music the whole film would play completely differently.

I’ve seen the movie probably a dozen times now thanks to the cable rotation and it blows me away every time. Sure I notice the story and the effects, but mostly I notice the music. The music is vital to this film since if you turn it off, as I have when I’ve muted the TV to take a phone call, the film stumbles. The film simply doesn’t work as well without it.

How important is the music to the film? If you listen to the score on it’s own it changes the world aroud you. It’s a weird sensation when you put on the music- you kind of disconnect from the here and now and go to a world somewhere else. The building themes and soundscapes alter you emotionally.

I know you think I’m nuts, but I’m not. Watch the film and then but on the music and you’ll see I’m right.
Posted by Steve Kopian at August 01, 2013