Balzac and the Little Chinese Seamstress (2002) 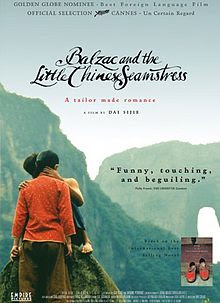 Two men are sent to a village in the mountains for re-education during Mao's cultural revolution. Both fall in love with a seamstress in the village to whom they read forbidden books to in stolen moments.

Beautiful, but unevenly paced story about the power of literature and music to change the world and change ourselves. Mostly unremarkable, the film pretty much does what you think it will, and since the film wasn't made by Orwell the ending (or its type) is never really in doubt.

I really enjoyed the interaction between the characters, the exchanges between them seem genuine and real but the plot line isn't gripping, this is a story about literature changing the world not a thriller with mad escapes. Admittedly watching this at 1230 in the morning didn't help my ability to remain focused, however I still think that I probably would have had my attention wander. That said worth a look, but not too late at night in the middle of a movie marathon.
Posted by Steve Kopian at August 16, 2013