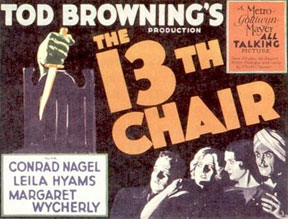 Most people don’t realize that Bela Lugosi had been making films for over a decade before he got his role as Dracula. To be certain he wasn’t the superstar that he’d become but he was still a force to be reckoned with on screen. Actually not only had Bela been making movies before Dracula, he also was working with Tod Browning, his Dracula director. Two years before Browning had cast Bela Drac he was cast as a detective investigating a murder at a séance in first film version of The 13th Chair.

The 13th Chair tells the story of  EdwardWales, played by Jon Davidson, who brings together a group of people who may have been involved in the murder of his friend. He’s worked it out that he suspects a highly placed woman had done it while dressed in a veiled costume. When everyone is brought together for a séance and the lights go out Wales is killed and Bela’s detective is brought into investigate.

Based on a play the film is very talky, normally this would kill a film but here the talk actually drives the film as the medium explains the cons of séances and thus sets up a great deal of tension because she assures us no trickery was going to be used this time. After the murder occurs Lugosi shows up and essentially takes over the film as he tries to run down a murderer. It’s a tour de force performance that surprisingly didn’t make Lugosi a star. Say what you will its clear even here he had great screen presence.

This is a neat little film. Yes the fact that it’s a stage play adaption limits camera moves but at the same time this isn’t a film that needs to be opened up (though supposedly the 1937 remake is better) For me its entertaining in it’s atypical nature, the staginess actually helps the film and gives a reason for it to unfold as it does.

A neat little confection that is in the Turner classics rotation and worth tracking down.
Posted by Steve Kopian at August 13, 2013