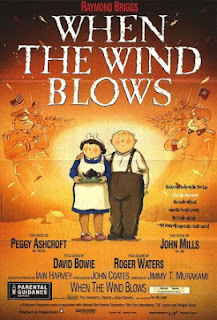 Be prepared to have your heart broken.

Somewhere in England-although it could be anywhere, an older couple deals with the threat of an upcoming war and a nuclear bombing. The bombs are in the distance and there is big explosions and fire and destruction just a slow waiting for the inevitable as the couple puts its faith in their government and the pamphlet they’ve been given to help them get through it.

Beautifully animated by Jimmy T. Murakami this is one of the unheralded and most beautifully animated films of the 1980's. I’m guessing that the reason people don’t really talk about the film is simply they don’t want to deal with the sadness that it brings. This is a devastating film that is wickedly bittersweet and sad. I don’t like to go to the place the film takes me to, but at the same time I find that I keep going back to the film again and again simply because the characters are so compelling I keep hoping maybe they won’t end up behind that door. I also keep going back because it’s a damn fine film of the sort you must keep returning to whether you want to or not.

I know that everytime I watch the film I keep wanting to scream at the screen for Peggy Ashcroft and John Mills to do something different, not to trust the hand out, to take real cover, to make a real effort to remain safe, but at the same time I realize that the dangerously stupid mistakes that the couple make are ultimately variations of stupid things I and the rest of us do ourselves in trusting the government and believing that they really know what they are doing.

You should see this film. Partly because it’s a wake up call about what we may one day face ourselves, but mostly you should see it for the beautiful animation and the wonderful performances of Ashcroft and Mills as Hilda and Jim. They breath such life into the characters that it really makes you wonder why there can’t be an Oscar for best vocal performance in an animated film.

One of the most truly under-appreciated animated films you’ll ever run across.
Posted by Steve Kopian at August 18, 2013