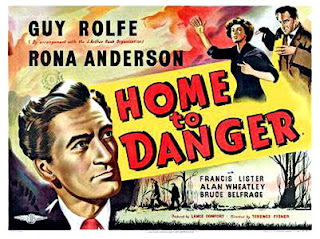 At some point I have to come up with a way of handling the small scale films that are good enough to note but which really don’t engender a long review.

For example I recently saw the film Home to Danger which was an early one directed by Terrence Fisher. This small scale programmer has a young woman being called back to London after the death of her father. They had been slightly estranged, she wanting to make her own way in the world didn't sit well with her old man. When the will is read she is at first given some jewelry, however in a recently added codicil she was given a house in the country. This sets in motion a a plot to have her killed by a very bad man who was mixed up with the girl’s father.

This is a small scale gem. This is a sweet little thriller that does what it does and gets off. The twists and turns are not really your typical ones and the film moves through them with great skill.

The problem is that outside of telling you that this is a neat little thriller, there isn’t much to say beyond that. This is one to keep an eye out for.
Posted by Steve Kopian at August 15, 2013