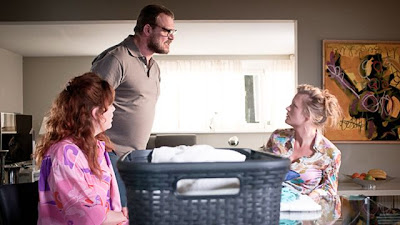 A knowing dry witted tale is a kind of existential gangster film that follows a bad ass guy who begins to have a change of heart or a change of point of view.

How knowing is it? Our hero’s boss is named James Joyce.

I’m not sure what I think of this film. It’s not a bad film but it’s a bit too knowing than I really liked. It’s a kind of self-aware film that knows it’s about more than its characters which adds a level of distance that really shouldn’t be there…unless the filmmakers wanted me to relate to the film as fable rather than as a real story.

Before seeing the film I had been warned by someone by someone I trust of something that happens at the start. It’s mentioned in the Fantasia write up so it’s not giving anything away. The person I was talking to told me how you react to the film will be determined by the bit where our hero is standing in the woods with a neck brace peeing and musing about blisters on his penis. I was told that if the scene clicked with me then I would love the rest of the film, if not I’d be in for a long haul. The film didn’t click with me and I was in for the long haul...well not really a long haul but it seemed more like a film trying to be much cleverer than it really was.

I’m guessing your reaction to the film will probably be determined the same way.