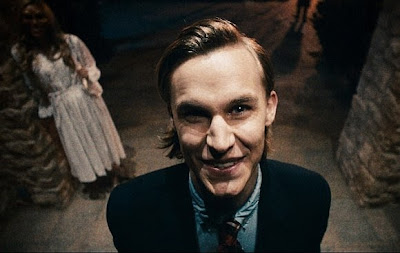 The Purge is a dystopian horror film that puts forward an America where crime is nonexistent and that unemployment is near zero. This is thanks to an annual purge , the one night every year when people can do anything and face no consequences. Within a gated community a family waits out the purge in its impenetrable house, however someone shows up looking for help, and somehow the mobs have breached the gates and they want in as well…

This is what amounts to a well-made slasher film with a brain. While the film is largely framed as a hunt and kill film, it also raises some interesting ideas about family and society. Ethan Hawke and the rest of the cast sell things well enough that you do buy into there being more than murder going on as well as fear for their lives and care about what happens.

The problem with the film, and it’s a major problem that pulls the entire film down, is the central premise of the purge. How would one night of murder rape and pillaging make all of the world’s troubles go away? Robbery perhaps, but murders and rape tend to come from anger or disease. You can lessen the crimes but you can’t stop it. The whole concept is too much to accept and would require a whole truck load of explanation to work. Yes I know I’m over thinking things, but at the same time the film is trying to be more than a hack and slash.

This should be a better film but I couldn’t get past the illogic of the central premise and so the whole house of cards collapsed.