An Interview with Lucy Mulloy, Director of UNA NOCHE 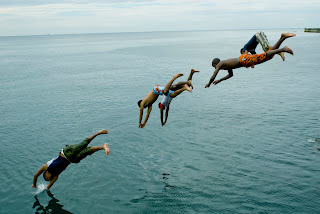 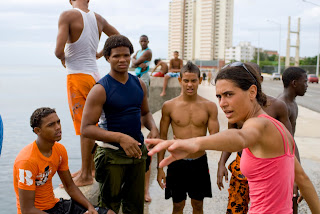 Una Noche is the impressive and passionate directorial debut of NYU film school graduate, Lucy Mulloy.  The film centers around 3 Cuban teens who have lived in poverty all their lives and in one night, risk it all to live in freedom.  Una Noche has been screening at various film festivals throughout the year to captivated audiences and will be released in theaters in Miami and New York City on Friday, August 23.  The film is scheduled for a wider release in 10 more cities. Lucy Mulloy took the time out for Unseen Films to talk about her film she wrote and directed, what advice to give female filmmakers and more.

Could you tell us what inspired you to make Una Noche?

The basic story of Una Noche was inspired by my meeting a young boy on the Malecon (sea front) in Havana. He must have been around 9 or 10 years old. I asked him whether he knew of any stories of young kids who had left on rafts and he started telling me about three teens who planned to leave together one day at dawn. The events that followed were terrifying and horrific and planted the seed for Una Noche although the narrative and characters are very different. I don’t want to tell you too much because it will give away Una Noche’s story!
h
Please tell us what inspired you to become a filmmaker.

I became a filmmaker thanks to my parents… they are both animators and are very inspiring, creative people. They didn’t let us watch TV much, so we had to make our own entertainment, painting, drawing etc. I was always around them when they were working so making movies was the most natural thing to do. My parents would be editing at home or shooting. We were involved in their movies since day one. I didn’t acknowledge it when I was younger, but both myself and my brother, who is also a filmmaker too, are very lucky to have such inspiring parents.
Your film is a story which takes place in Cuba.  Could you tell us how that came about and did you feel any pressures communicating a story that is so specific to a particular place?

I spent a lot of time in Cuba and the way of life there became familiar to me. It was very important that movie felt real and portrayed the Havana that I was experiencing. It was also crucial to me to represent this voice that I was not hearing anywhere in the media neither inside nor outside Cuba.


I felt liberated creatively in Havana, away from critical eyes. I did not concern myself with what other people might think. Too much concern for how people will perceive your work can be the death of creativity. It becomes crippling when you second-guess what other people might like. In my real life I am probably too concerned with how people may see me, but in my work, I put so much passion and energy into it that it is the one place that I have to be free to make choice with my gut and do exactly what I feel is right with no limits or concern for whether other people like it or not. If I don’t work like that it’s not worth it for me.

Please tell us how you cast your lead actors in the film.
We started casting by following the traditional route to find young talent, through the acting schools and Cuban TV, but people were mainly trained for theatre and we were looking for something subtle. We started street casting. We went to every high school, beach, concert, party, cinema and ice cream parlour with flyers, and we had thousands of people audition. Every weekend we had a line of people going down the high street waiting to try out for Una Noche. Every person who came did an improvisation, and I interviewed everyone. I was also on the look out for additional characters. We had a lot of really talented people come in.


Javier, who plays Elio, his picture was taken at his school. He stood out in his photo with his collar popped, and his charisma was apparent even in his snap shot. When he came into the audition he froze and did not say a word for what felt like a really long time, but when he eventually got the courage to speak, his improvisation was so good I could not tell if he was acting or serious.


Anailín (Lila) was at the beach with her family when she was asked to audition. When she came in she acted next to Dariel, who had, by this stage, met practically every girl in Havana. I looked at Dariel and both knew without saying anything that she was Lila.


I met Dariel (Raúl) at his school entrance. He was surrounded by a group of girls and I gave him a casting flyer. He was charming and had the air of being a player, which is what I was looking for in his character. After I met him, as I was walking away with the casting assistant, I told her that we had just found Raúl. He came to three auditions and got the part.

The film has been quite successful at film festival screenings.  Could you tell us about your experience touring with the film?


It has been incredible seeing how the story of Una Noche, which is about a specific place and a very particular society, can transcend and be understood in so many places. It brought home to me how emotions are understood in a similar way all over the world. I was so happy to see people from India, Morocco, Russia to France respond to the movie in similar ways, laughing at the same moments and empathizing with the characters’ situations. That was very inspiring.

How is Spike Lee involved with the film?
Spike Lee is my mentor and he has been incredibly supportive of the film from the very beginning. We were awarded the Spike Lee Grant, which went towards production of the film. He was also very helpful during the editing process and gave a lot of very useful advice. Spike is taking the presenting credit on Una Noche, which we are really happy about.

Do you have any advice for young women who are interested in making films?
Film is not easy for young men or women to start out in and I would give them both the same advise, to take each rejection as a stepping-stone to finding the right path. Do not let it get you down. The main thing is to stay passionate, be around good, supportive people, and to discern when something is worth your time and if you feel it is go for it with all your energy and tenacity.


For the young women reading this, maybe we have to make it happen more ourselves at this point in history. The doors are not that easy for us to open, but we are making movies.  Look at Lynn Shelton,  Dee Rees, Maryam_Keshavarz, Ry Russo-Young, Victoria Mahoney, Lucy Walker, Rebecca Thomas, Daniela Seggiaro, Eleanor Burke, So Yong Kim, Gloria La Morte and Paola Mendoza, to name a few. We are mainly at the start of our careers with one or a few features to our names, but we are securing funding and making our films on our own terms. Things are changing and there is a new generation of female filmmakers here.

Could you tell us anything about your future projects?
Yes, I am working on a script at the moment set in Rio and New York, which I am very excited about. I cannot wait to get back to working with actors and thinking about shots and editing. That is what I really love and what makes me really happy. 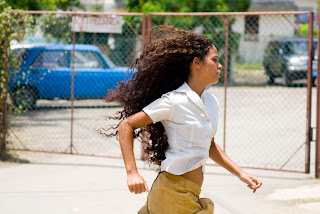