A few positive words on Rob Zombie's Lords of Salem (2012) 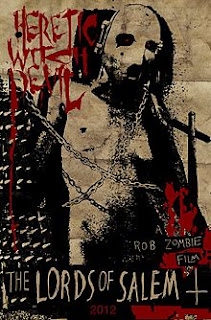 With Lords of Salem Rob Zombie positions himself as the greatest horror director working today. This riff on Euro horror manages to take the old world stylings and create something new.

Sherri Moon Zombie stars as Heidi, a DJ on the local radio station on the late night shift. Receiving a strange vinyl record from The Lords. Listening to the record wells up “repressed” memories within her. And when the record is played on the air similar reactions occur in all who hear it. At the same time weird things begin to happen to Heidi, which unbeknownst to her is merely the precursor to the return of The Lords.

You’ll forgive the brevity of the plot description but things are much more complicated than I can really explain. Additionally the film shifts into a dream like logic in the second half of the film. Events transpire but they are not completely understandable on an intellectual level, however on the emotional or visceral level the film is in disturbing territory. I can’t explain what happens because it will sound like gibberish and it will require that I explain things according to the way I see it which may not be the way you do.

It’s the shift into the dream or the shift beyond reason that is what sets the film apart. Operating in the same realm as say some of Dario Argento’s films, say Suspiria or the other “mothers” films, the film is intent on creating a mood, or perhaps a headspace where the evil and ideas that Zombie is presenting can fester and grow. Zombie's film isn’t scary in the sense that there are monsters leaping out of the landscape screaming Boo!, its scary because its creating a world that replaces our own. Zombie and his evil worm their way into our psyche so that when the film ends we’re emotionally broken and fully believe that just outside the theater door these things are transpiring. It’s a weirdly bloodless affair, yes there are things we don’t want to see but it’s not because blood is splashed everywhere.

I admire Zombie’s bold choices. In an interview in Fangoria Zombie states that in making the film he went against his instincts and locked the camera down. He dropped the wicked humor and did things that were counter intuitive for him. To me it’s a bold brilliant change of pace since it forced him not to take the easy way out. It forced him to find new ways to frighten us. Ultimately it made for a better film…and it made it ten times more scary since we couldn’t lean on any Zombie-isms we are I virgin territory with no way to know who is good bad or anything else.

The Lords of Salem is one the finds of the year. It’s a must see for anyone who loves good horror, especially horror that is more than just blood and gut sprayed across the screen.
Posted by Steve Kopian at August 07, 2013