Finding joy at the movies again: Seeing The Wolverine (2013) 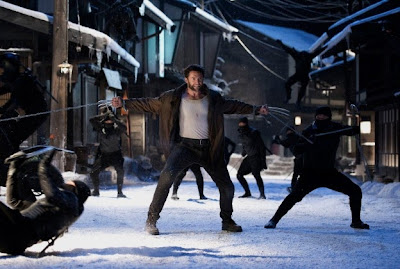 Last night I did something I haven't done in a very very long time, I went to the movies with not even the remotest thought of Unseen Films. Those of you who don't know me are wondering what that means. What it means is that as much as I love movies, as much as I would watch movies all day long because I just like the stories, because Unseen Films is essentially my wife, everything I see is potential fodder for the site. Not only that I frequently make decisions of what to see because I think a film may or may not fit into Unseen some how.

Of course it didn't start out that way. I was going to see THE LONE RANGER because everyone was arguing if it was good or bad, I figured to put my two cents in, but then the theater I thought it was in was doing early screenings of Planes so I was SOL. Anyway with a night at the movies planned and no other choice I decided to just up and see Hugh Jackman.

The experience was a bit strange since it was the first time I had been in that particular multiplex in ten or fifteen years. I stopped going to it because the theater has tough parking rules and was always run down, however last night I found the parking easier and the theater had recently been refurbished. It was also really cool to just be sitting in a seat and not have to do anything, not notes, not deadlines, not need to write the film up. I just was there... I even didn't mind when a bunch of ten kids came in and were rowdy. I was, for the first time in almost four years at the movies for me and only me so I didn't care.

Sitting in the theater I realized a couple of things, first, I really miss going to the movie for the hell of it. It never happens any more and I really just miss being a fan and not a writer. Yes I know I can stop doing Unseen any time I want, I don't get paid for this, but at the same time I've agreed to do certain things and to be responsible for other things and if I just stop it will complicate other peoples lives. I need to get things past a few hurdles before stopping... Sitting in the theater it was made clear that once the fourth anniversary comes in February there are going to be a few changes.

Seeing the film for no reason, I reconnected with the sense of why I love movies, which is something I haven't much felt the past couple of months. I realized that at the movies I can, for two hours, completely lose myself... movies should be fun and not work.

Anyway- personal revelations aside you maybe wondering how was the movie?

The plot of the film picks up after the third X-Men movie. Logan is living alone in the woods. He's been there for at least a year essentially communing with the spirit of Jean Grey and waiting to die. When he goes to town to get revenge for a giant bear some nimrod hunters failed to kill, he is met by a young Japanese woman who said that an old friend in Japan wishes to say good bye before passing on, Logan agrees to go to Japan where his friend offers to make him mortal in exchange for his healing power. Logan refuses and his friend dies...This then sets in motion a series of events as Logan's healing power is compromised and his friends grand daughter is hunted by the Yakuza. Where it goes is the film.

While the film does have action set pieces, it's largely concerned with character and plot. There is so much character development that the rowdy kids left the theater by the time the film was half over because it was too low key. From my perspective the character and plot development was like manna from heaven and I was doing a quiet happy dance. To me the film is closer to the best comic stories, such as the Frank Miller tale that serves as the inspiration for the story, than most Hollywood summer blockbusters. This film isn't sound and fury signifying nothing, instead we have meditation on loss and the place of heroes in the world. Its clear that this is a movie with a great deal on it's mind.

Until the final half hour or twenty minutes the film is an absolute joy. And it's that final bit with the completely fake Silver Samurai that keeps the film from going on my best of the year list (can you tell I liked the film?) The problem with the final bit is that where everything that had gone before was plot over action, the Samurai sequence is action over plot. Things stop making sense, visual effects falter and what was for most of the running time a graphic NOVEL on the big screen instead became a comic book. To me it seemed like the screenwriters didn't know how to end it, and while it annoyed me I groaned and went with it.

That said I had a blast. One of the better summer films of the year and a great comics film. Consider it an action film for those who want more than action.
Posted by Steve Kopian at August 09, 2013