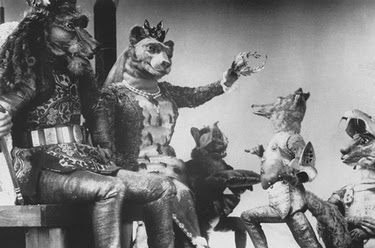 Tale of the Fox is a masterpiece of feature animation. Completed around 1930 the film sat on the shelf for a few years before a German soundtrack was put together before a French one was done a couple of years later. It’s the French dialog track that is out on DVD.

The story is based on the various stories of Renard, the fox, who causes mischief in the animal kingdom until the king has him arrested- but even that doesn’t stop him.

A masterpiece of world cinema, at least on a technical level, this film is truly amazing to look at. How the hell did Ladislas Starevich get the animation to look this good? The fluidity of the motion blows me away and I’m not sure how he did some of the bits. The assault on the Fox’s castle at the end of the film is quite simply a mind blower, yes some bits look animated, but other things don’t and what’s confusing they are often in the same shot.

What’s also mind blowing is that most of the characters are covered in fur and you don’t really get any indication that unseen hands are touching them. Watch Willis Obrien’s work in King Kong and you see his fur rippling as the result of the animators touching Kong’s fur. You have almost none of that here.

As wonderful as the film is technically, the film suffers in one key area- Renard- the fox is a dick. There is no getting around it he really is a slime who’s tricks are more damaging them funny. Yes I know this is variations of the various trickster legends, but at the same I don’t ever remember the stories being this nasty especially since the trickster always tends to deflate pomposity and here it’s the fox trying to abuse everyone. I could live with it if the rest of the characters weren’t so stupid. How could the King no realize sooner there was a jerk in his kingdom?

Reservations aside, this film is definitely worth looking for, especially if you’re a fan of animated films.
Posted by Steve Kopian at August 17, 2013