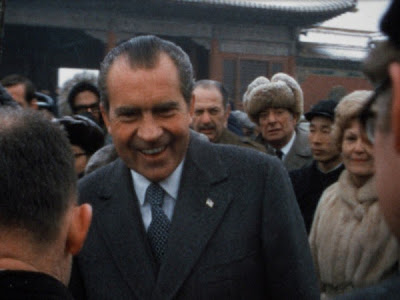 CNN produced documentary is largely made up of home movies shot by the members of the Nixon White House. Much of the footage was seized back in the Watergate days by the Feds and had remained unseen until now. The footage is supplemented with current interviews and news footage from the time.

Wonderful counterpoint to the typical attitude that Nixon was a bad guy. While Nixon's reputation isn't completely rehabilitated, it is softened as we see the man behind the madness. Filled with great moments (the opening credits set to Tracy Ullman's "They Don't Know About Us" is a blast and a half) this is a fantastic look back at a time 40 years ago and is now not even a memory for many people alive today.

The film is hitting theaters tomorrow and is worth a look see if you want a deeper look than at things than you get in the history books. (And if you can't make it to the theater the film has been playing on CNN, that's how I caught it)
Posted by Steve Kopian at August 29, 2013