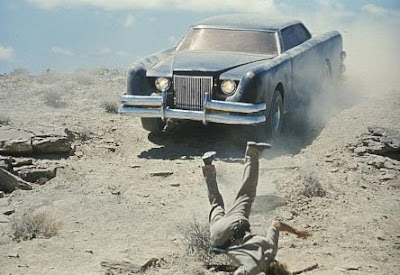 Long before he was Mr Barbra Striesand and Josh’s dad, James Brolin was an honest to god bankable movie star. This isn’t to slap Brolin, who is actually an excellent actor when given the right material, rather it’s simply to state that Brolin, a TV staple for the last 40 years occasionally could star in a big screen outing and getpeople to go. The trouble with Brolin’s cinematic choices was that his misses tended to be the things we remember instead of his numerous hits.

One of the “hits” or at least one of the films that most people remember when talking about Brolin and the movies is The Car.

You know The Car don’t you?

The Car is film entertainment reduced down to it’s most basic, a possessed black car drives around the American South West and runs people over. Meanwhile James Brolin as the police chief, tries to stop the mad driver.

That’s it that’s all there is, you never see anyone in the car, you just see it driving around causing mayhem.

And yes it’s as dumb as it sounds…at the same time it’s rather entertaining. Sometimes when you reduce everything down to its most basic level things work despite the fact they shouldn’t. The car shouldn’t work. It’s dumb idea with no answers, but somehow it’s gripping in the way the best exploitation popcorn movies are.

I really do like the film and find that every time I run across the film on cable I stop and watch it. I hate myself for doing so, but I do it anyway.

This is a film when you want to go concept and highly entertaining but in a I shouldn’t be enjoying this sort of a way.
Posted by Steve Kopian at August 12, 2013