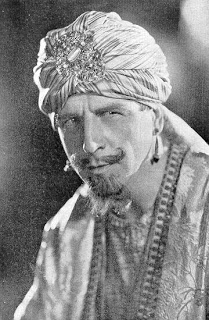 Not an early version of the same story as the 1940 Errol Flynn film, this is based upon a novel by Rafael Sabatini who gave the world Scaramouche and the Captain Blood novels (one version does have Errol Flynn).

The film is the story of Oliver Tressilian. A well to do noble he is settled into a life of leisure. Disliked by his half-brother, he is framed for murder and then carried off to sea by scoundrels paid by his brother. Events take rapid turns as the ship Oliver is on is captured by the Spanish, he’s forced to become a galley slave, makes his escape during a sea battle, then becomes a pirate… and on and on.

A mix of romance and adventure, the film scores high points once the film gets away from the intrigue on land and gets Oliver onto the high seas. A rip roaring adventure with sea battles and action the film is truly spectacular and it’s easy to see why Hollywood movies were big to dos back in the 1920’s. Films rarely ever look this BIG.

While I’m not a fan of the soapy nature of some of the plot, and I wish it sprung to life a bit sooner than it does (it’s about 40 minutes in that it goes into overdrive) I still really like the film. It’s a rip roaring adventure of the sort that Hollywood doesn’t make any more, made at a time when it was just perfecting the formula.

Definitely worth seeing, especially if you are willing to be patient at the start. Out from Warner Archive, the film also plays occasionally on Turner Classic
Posted by Steve Kopian at August 28, 2013