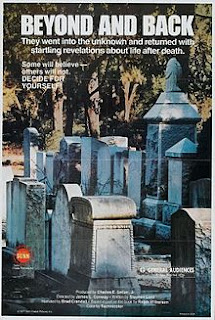 One of the odd ball Sunn Classic documentaries that filled theaters in the late 70’s and 80’s with promises of real life strangeness takes a look at what happens when we die.

With creepy narration by Brad Crandall and weakly done recreations of the stories of various people who crossed over and then came back (hence the title) the film is a strangely compelling experience that vacillates between being funny and being kind of unnerving. While I do know why the film is funny, the acting and technical acumen is rather low, I’m not sure why the film occasionally manages to be creepy. Part of it is Crandall’s deadly serious narration, but I’m guessing that the other part of it is that the longer the film is on it kind of wears you down and makes you think, that maybe perhaps this could be real. I also suspect that the film is 35 years old the nostalgia factor kicks in and what would be patently silly if released today takes on the aire of a good (or at least okay) ghost story. The low rent version of what happens when we go to hell is rather dark (Though not as dark as some the Asian fictional takes on what happens when we die).

Sue me I have a soft spot for the Sunn Classic films. The films, which are probably best considered the last gasp of the mondo movies in theaters, were everywhere on TV and in theaters when I was growing up. I still remember going nuts when I’d see TV commercials for films such as this since it was a chance to see real life counter parts of the monster movies that I love. The films were HUGE money makers that took in the a quarter of what Star Wars or Jaws took in over a year of release but only in a matter of weeks. That may not sound like much in today’s terms, but back then it was unheard of and it resulted in a steady flow of documentaries on weird subjects.

As for Beyond and Back, it’s an okay time killer. It’s far from the best that Sunn Classic cranked out, but it still is entertaining, especially when curled up on the couch with a bowl of popcorn.
Posted by Steve Kopian at August 10, 2013