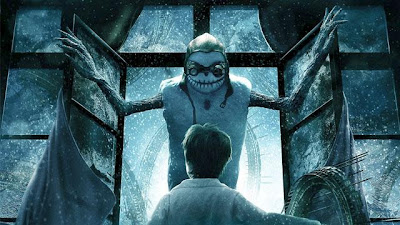 Strange rock and roll tinged fantasy about a dying composer is in the throws of dementia, drifting in and out of a fantasy world occupied by dreams and memories. As his daughter comes to take care of his affairs she must try to unlock his mind and bring him back to reality before it's too late...

I’m going to have to ask you to bear with me concerning this film because in trying to describe I want to use analogies that may fit a moment in the film, but are not adequate to describe the film as a whole. Yes the film has moments that remind me of the work of Tim Burton, Neil Gaiman, a 38 Special or Heart music video, some moments of David Lynch, Peter Pan, Raymond Briggs’ Snowman, Dream One, Tarsem Singh’s The Fall, and a few other films but to use them as a blanket statement would be wrong, completely wrong and unfair. (I do love the Fantasia Film Festival website but their write of this film is slightly misleading because they use blanket statements). Perhaps the one thing that the film is like is Winsor McKay’s Little Nemo in Slumberland since more than once I had a feeling that what I was seeing could have come from McKay’s classic strips.

A unique adult (ie. It’s not aimed fully at the family audience) fantasy the film deals with matters of life and death while telling a good story about a man trying to come back to sanity. While the film feels familiar (see above) it’s also a film that carves out a unique path for itself, it’s a film that may travel near familiar territory but isn’t in it. (and no this is not like a Tarantino film that repurposes bits without shame, daring you to figure out the steals, rather this is like your brain which weaves bits of existence together into what we call memory)

I really do like this film a great deal but at the same time I don’t know what I completely think of it. The problem is that between the festival write up and the above picture I was expecting something else. I’m not sure what I was expecting but it wasn’t what I got – which is why trying to compare the film to something that went before is completely unfair. For me reading about all the things the film was like worked against it since I was not ready to take the film head on. I think the best way to explain it is it was kind of like seeing the work of someone who repurposes items into new works of art. I was seeing the pieces in their original context and not the new. In an art gallery I can go out and walk around for a bit and then come back into the room with the questionable art and see it with the eyes that it deserves. With a movie it’s a little trickier since I have to go out of the theater and then clear my head and try again. With a festival screening it’s even harder since it because of limited opportunities to see it again even after you’ve cleared your head.

My need to see the film again aside I think you should definitely give the film a shot. It’s a film that really has a unique vision of the world and of the mind. I don’t think it would be stretch to say that within a year or two the film will have attracted a group of people who really love the film and will vocally stand up for it.