As part of Lincoln Center’s look at David Bowie the actor they are running two programs from the BBC vaults that have not been screened in the US previously. 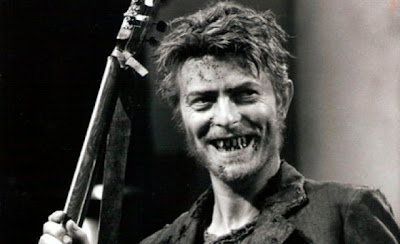 BAAL is an hour long adaption of Betolt Brecht’s first play which concerns a rather vile man named Baal who charm everyone with his poetry and songs, but leaves a trail of broken souls in his wake. Covering the events of 8 years as Baal seduces women, spends money he doesn’t have and is generally nasty to everyone we watch as he slides down to the point where he is left alone.

Bowie is a revelation as Baal and anyone who has any reservations about his ability to act should see this since Bowie is perfectly capable of playing a man people love and hate.

The production, which I’m told chops out about half the play, is hampered by the source material which like several of Brecht’s plays is too artfully constructed to be anything more than something you admire (characters are one thing, people don’t speak naturally but make mini speeches or basically ideas take precedence over the drama). I can’t imagine this at two hours (The original Film Society material lists this as running two hours but the program is only an hour)

Reservations with the source aside the film is definitely worth seeing because of Bowie’s performance if nothing else.

CRACKED ACTOR is a BBC documentary filmed during the Diamond Dogs Tour in the US. Following Bowie as he travels to LA to perform we get a look at the man on the edge. Bowie commented 15 years later that he was close to destroying himself at the time the film was made and its clear that the well-spoken performer of later years wasn’t always there. There are times, such as the opening news interview where Bowie is clearly stoned. His ultra-thin frame looks incredibly fragile and one wonders if he fell if he would snap into several pieces.

When Bowie is serious he becomes an interesting subject as he talks about performing, his music, his clothes, his fans and his psyche. It’s a look inside his mind before he became more controlling of image.

We also get to see the performance of several songs on the tour which makes me wonder what the whole show was like. To be quite honest that if the film has any lasting value it’s the recording of these live performances

More time capsule than anything else the film is a portrait of the man at one moment and place in time and as such it’s a neat little film to see. Worth seeing when the film plays one of its multiple screenings at Lincoln Center with Ziggy Stardust or the Bowie Music Video Collections
Posted by Steve Kopian at August 01, 2013