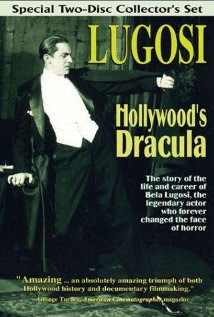 LUGOSI HOLLYWOODS DRACULA
Lugosi Hollywood’s Dracula is a very good but very uneven look at the man his life and his films.

The film released at the time of a US Postal  stamp covers Lugosi’s entire life and career. Filled with tons of pictures and clips the films odds are you are going to see something you’ve never seen before, say pictures of Lugosi as a boy or a clip of one of his Hungarian films from 1918. For me the best part of the film is it filled in a good deal of the personal stuff about his early and mid life that I never knew about. Sure everyone concentrates on his decline and his Ed Wood years but no one talks about the early days, this film does it in spades. Filled with interviews with many of the people who knew Lugosi the film paints a charming portrait of the actor as a nice man. Sure he was a womanizer (they say he fought at least 11 duels over women) but he was a charming man.

I really liked the film, I just wish it was longer. Seriously there are these little clips and bits in the extras on the DVD that make me wonder how this would have played had the film actually been say twice it’s 52 minute length. Lugosi’s life needs a full length look.

BELA LUGOSI THE FORGOTTEN KING OF HORROR
Made before the larger resurgence after Tim Burton's Ed Wood, this short documentary is narrated by long time editor of Famous Monsters of Filmland Forrest J Ackerman.  The film is a fast paced and informative look at the life and times of Bela Lugosi.

The film is one of the best biographies (the best?) of Lugosi out there. While the film's use of clips is limited to footage from either trailers (Dracula, Murders in the Rue Morgue), public domain films (White Zombie, Mystery Marie Celeste) or promotional films, it is filled out with photographs, and interviews with people like Caroll Borland, Ralph Bellamy and John Carradine. This is key  because it allows for people who knew him when to tell the stories that they were there to experience (I love Borland's story about getting the role in Mark of the Vampire.)

The best thing I can say is this is if you've never seen a documentaary on Lugosi see this one. Once you see this film you'll never need to see another.
Posted by Steve Kopian at August 03, 2013