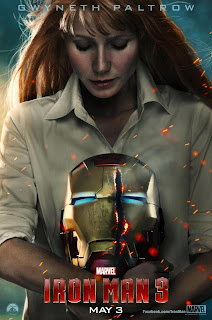 I am an Iron Man Geek. I have hundreds of issues of the comics plus lots of related stuff. I loved the first film, hated, mostly, the second...which brings me to the third film..

Weeks after it was released to theaters I finally got to see the third film. Not that my paltry admission made any difference seeing that the film is already one of the highest grossing films ever. One early summer's day I went to see what all the shouting was about and if it was better than the last film in the series.

First things first, the film is quite good, but I don't think it's great. Its far and away better than the second film, but over all not as good as the first.

The plot, which somehow has remained largely undiscussed, concerns Tony Stark dealing with the fall out of the Avengers film. He's got PTSD bad. Not sleeping for days he tinkers and comes up with weird suit variations. Eventually he gets involved in the machinations of The Mandarin an evil terrorist doing some truly vile things. The Mandarin is some how blowing things up which leaves the shadows of his victims etched into the walls. Theres more but I'll be nice and leave it there.

Better than Man of Steel, Iron Man 3 has a bit of trouble starting, things are a bit unfocused, with bad guy semi off screen while Tony mopes and fiddles. Once Tony is drawn into the action, via a kick ass destruction of his mansion, the film takes off and we get some great action sequences punctuated by one liners and some nice moments between Tony and Pepper.

The problem for me is that the plot is a bit too simple. Yes there are twists and turns, but at the same time, and I say this with a great affection for the genre, it's too much of a comic book. Yes the bad guys are bad but at the same time the whole things feels over inflated... and a bit too obvious, I can't believe that people aren't talking about the twists and turns or even discussing the plot. Most people I know are stating the film is good and leaving it at that. Don't get me wrong, I had a good time but I was hoping for a bit more something.

While I recommend the film with out serious reservation, I'm still hard pressed to fathom why the film has made so much money. If you have any ideas let me know.