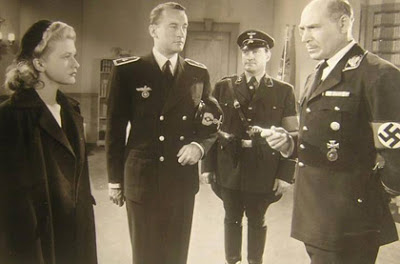 English man George Saunders stars as the son of German immigrants to the US (and you thought Hollywood typecast) who returns from his mining job in South Africa to help the German American Bund movement in the US. His father is furious and drives his son out. What Saunders’ father is unaware of is that his son is actually an undercover FBI agent tasked with infiltrating a the Bunds and the Nazi sabotage ring. Taking the identity of a Nazi agent that was killed Saunders finds his way into the sabotage school, and running afoul of the Nazi’s when he makes the acquaintance of a beautiful young woman who is in the underground… (and it gets worse)

Old school Hollywood propaganda walks the fine line between grand adventure and silly preach-ifying. It’s the sort of old school film that don’t make any more, partly because we are not fighting that sort of a war, but also because we simply aren’t making that sort of a film. You know the film where the hero does the right thing, takes down the bad guys with flippant remarks and manages not to even get a speck of dirt on him. None of it is believable, but at the same time you get carried away because the actors sell the nonsense so well you actually fear for Saunders. Actually one of the things that works in the films favor is that it is a war time film. Because the film comes from the war it means all bets are off, characters could possibly die. Sure any death will be heroic, but no one is safe.

Far from a great film, it is a damn good one. It’s a sweet little war time drama with a wicked sense of humor. That the film works as well as it does is thanks in large part to George Saunders who manages to be a strapping hero and to be vulnerable. His dalliance with the underground agent puts him in to danger and he looks tense. He also manages to handle some of the odd twists that come his way (the man he is impersonating has a wife) and while we can be sure he’ll be some form of okay, he still makes us feel he’s still afraid that what he’s doing isn’t going to work.