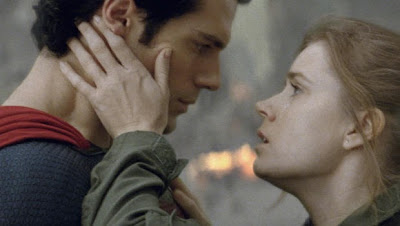 Rethink and restart of Superman gets a great deal right, and even more wrong. For my money it's a major misfire.

The plot of the film has Jor-el sending his only son to earth to escape the ultimate destruction of Krypton which is dying due to over use of the planets resources. Meanwhile General Zod and his men stage a coup, are stopped and are sent off to prion. However they escape and come to earth when Kal-el, aka Clark Kent, sets off a beacon in a Kryptonian scout ship. Clark has been wandering the earth as a migrant worker helping people where he can and disappearing after he is discovered. What follows are endless battles as Superman/Clark fights for us and Zod tries to take over the earth.

While I like the idea of Clark the wanderer I find that the idea of a tortured Clark too contrived. The shift from the Clark Kent/Superman we all know to a brooding moody hero feels much too calculated. I think it was assumed that audiences wouldn't buy the classic superman so they changed him.

The real problem with the film is the shift away from character to big budget action set pieces. Over half this film has to be things blowing up or being destroyed. Not even the Transformer films, which I largely despise, are this bad.I tuned out and turned off. None of it makes a lick of sense with huge gaps in logic filling the places between explosions. Worse many of the sequences seem to have been cribbed from else where- Avatar and numerous video games.

As for the much heralded climatic battle between Zod and Superman- its a bust and intellectually and emotionally wrong. While I would be fine with Superman killing under the right circumstances- I mean how many people die as a result of his destruction?- the situation here is all wrong and there were ways around it. What I don't like is that the broken brains behind this film seem to have constructed this whole mess of a film for that one moment and then failed to get it to work-not the least of which is if Zod is super powered like Clark how could his neck be snapped? (I could go into about six other reasons but I won't bore you with comic geek stuff)

While there is much to love  about this restart (primarily the sequences with Clark and his fathers) and the possibility of more films- the vast majority of this film is best forgotten.
Posted by Steve Kopian at August 19, 2013