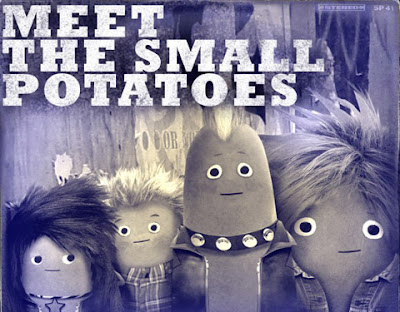 Expanding the TV series, which runs on Disney Jr in the US, way past the typical 3 minute episodes, Meet the Small Potatoes is a mocumentary that imagines the group as British super group that started on a farm and then managed to become bigger than the Beatles. The story is told primarily by a super fan in New York and by their manager (voiced by Malcolm McDowell) and it follows the group from their founding, first success, the infighting, breakup and eventual reunion.

I had only seen one episode of the show before seeing the film and I was kind of perplexed as to how a show that was barely three minutes long and being screened as an occasional bumper could actually go anywhere. Amazingly the creators are much more clever than I had thought.

The film is a charming film that will entertain most kids of a certain ages…and I suspect that their parents will enjoy it even more since they will get all of the references to their favorite rock bands over the last half century. The parents are also going to be the ones catching the written puns, jokes and gags that are hiding in plain sight throughout the backgrounds. It’s a blast, and I know I have to see the film a second time before I give it to my niece so I can be sure I caught everything.

The film exists in two cuts. There is a short version running about 50 minutes that has played Disney. The film premiered in that form on Disney just before it was supposed to world premiere at the New York International Children’s Film Festival. The Film Festival premiered the longer 72 minute version, which is the one that I saw. Honestly other than one shot of the Malcolm McDowell's  character with a cigar in his mouth, I don’t know what you would cut out of the film and have it work. Nothing in the film feels extraneous or draggy. It all works.

Is this the best children’s film? Absolutely not, but considering the number of crappy kids films being churned out these days it’s nice to see one that not only will entertain kids and their parents as well. Or to put it another way if your kids want to watch this it won’t kill you to watch it with them.
Posted by Steve Kopian at August 08, 2013