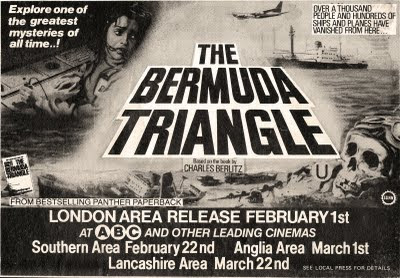 Attack of the Sunn Classic documentaries!!!

For those who don't know Sunn Classics used to release films on Bigfoot, UFOs, life after death and assorted other subjects to hundreds of theaters for brief stays and then flood the TV stations with commercials for their sensational fare. The films usually had Brad Crandall doing narration and acting as on screen host as we saw lots of recreations of supposedly true events. As a kid we ate this stuff up.

Here Sunn Classics give the once over to Charles Berlitz's book on the strange disappearances that happened in and around the supposed Bermuda Triangle. Of course since the ships and planes disappeared we simply get lots of questions and lots of recreations.

I've read the source book and its reasonable enough to make you wonder if perhaps something is going on. I can't say I fully buy the premise but its full of good yarns. unfortunately the stories don't always play out so well when recreated. Part of the problem is that seeing the events makes them seem sillier than they are and partly the cheap special effects make the whole affair seem cheap. (I won't even get into the liberties the film takes with the material from the book).

As a serious film you won't believe a word of it. As a throw back to a simpler time before the likes of the Discovery Channel this is a blast. Its entertaining in a silly sort of away. Watching it again for the first time in a decade or so I can't believe that this film scared some of my friends.

Recommended if you're in the right frame of mind.
Posted by Steve Kopian at August 11, 2013