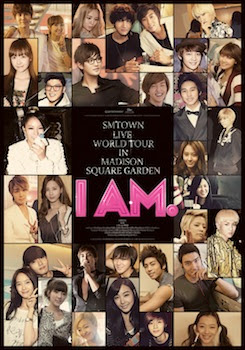 The Korean Cultural Service has a really amazing screening coming up on Tuesday the 13th as part of their "Free Movie Nights" series, they're going to be hosting a special screening of I AM, a fantastically fun documentary about the band SM Town, and their struggles and triumphs to set up a 2012 show at NYC's Madison Square Garden.

AUGUST 13 – I AM. (2012)
The music documentary I Am. follows the chart-topping K-pop band SM TOWN as they prepare for a live performance at one of the world’s most prestigious venues: New York City’s Madison Square Garden. Shining light on what defines the performers and the intense effort that goes into their meticulously-staged concerts, this touching coming-of-age story is just as much about the growing pains and glory of the young artists as it is about their music. Featuring tons of incredible music and amazing K-pop cameos, this is the inside look into Korea’s popular music scene.
Posted by Steve Kopian at August 08, 2013