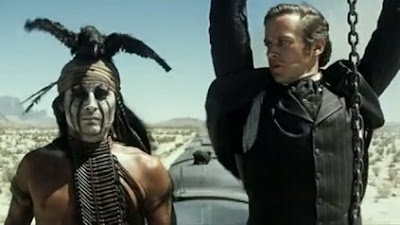 Blame it on uncertain tone.

Blame it on the need for huge action set pieces

Blame it on the filmmakers not trusting their source material.

Blame it on a lot of things but the new version of The Lone Ranger is a bloated disappointment.

Why couldn't they have just played it straight?

Plot of the film has an elderly Tonto relating the story of the Ranger to a young boy at wild west show. He tells how he met the Ranger on a train that was transporting him and Butch Cavendish to jail. John Reid(The Lone Ranger) is an attorney going to his posting when Cavendish's gang frees him. Tonto is returned to jail and Reid goes off with his brother to get Cavendish. Ambushed the rangers are killed and John is barely left alive. Tonto arrives and revives him. The pair then goes off to get Cavendish and the evil businessman he's working for.

Huge scale film doesn't know if it wants to be serious or send up. Alternating from tongue in cheek comedy to straight on action the film seems to have taken the two scripts and melded them together without a thought of how it would play out on the big screen. I'm sure they thought the jokes, most of which are low humor were funny enough and I'm sure they thought the big action filled the requisite for a summer blockbuster but I'm guessing they never sorted out how the two would work together. Unfortunately the jokes take the edge off the excitement and the set pieces belong in a more serious film.

Actually the set pieces, almost all of which involve trains, are emotionally dead. They are huge hulking affairs with a never ending supply of physical twists and turns. They are so huge that much of the first half hour of the film is taken up by the introduction of Reid and Tonto and the final hour is pretty much just two pieces (or is it really one?) that are tied to rescuing Reid's nephew (and father of the Green Hornet) and sister in law. If your doing your math that leaves roughly an hour where you can slip in a plot, or would if there wasn't a couple of other set pieces in there as well.

Is it any wonder that the film is such a mess or that it has to use silliness and short hand characterization to get it's points across.

To be perfectly honest I'm mostly okay with the revisions. I can live with Reid being a tenderfoot and Tonto being the man of action. I like the spiritual nature of it all. What I can't live with is the slips into buffoonery that Tonto goes into. Is he man of action or fool? The same thing goes for the Reid/Ranger character, which is he? I'm guessing that the filmmakers didn't understand that blandness of the Ranger was his strength,he was a good guy to a fault. They thought he was boring.

For me the film works best when its serious, which isn't often. When the film is serious, even in its mysticism it shows signs of what it could have been a damn good updating and an exciting western. As it stands now it's just a bland film that lurches from thing to thing. Its six action set pieces in search of a plot line.

I can't believe that they spent 250 million dollars on this.

Worth trying but wait for cable or Netflix
Posted by Steve Kopian at August 26, 2013