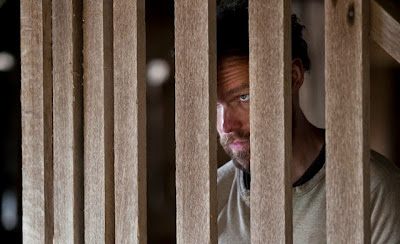 God bless James Franco. We need more filmmakers like him. We need more people who'll try to do the impossible and go into nasty ugly places and occasionally find humor in them.

CHILD OF GOD is James Franco's adaption of a Cormac McCarthy  novel about Lester Ballard a man who hasn't been right since his mother ran off and he found his father hanging when he was ten. The film begins with Lester's house being sold at auction and his disappearing into the woods. He lives off the land, steals live stock and makes a general nuisance of himself.  Eventually things escalate after he finds the body of a dead girl and finds himself attracted to her.

Probably one of the few films to truly fit the term horror as in horrific, rather than scary, this is a leap into the black void of madness ala Ed Gein and similar crazies.What happens is bleak and black and caused several people to walk out.I suspect that the film's gallows humor, not to mention necrophilia helped drive them away. Franco has described his main character and the film as Deliverance meets Charlie Chaplin and I think it's only slightly off target in that Lester isn't sympathetic like Chaplin, though what happens is often groan inducing funny. Its ridiculous but at the same time its damn scary.

How you react to the film will depend  largely on how you react to Scott Haze as Lester. A weird collection of ticks and looks mixed with an occasionally impossible way of speaking  this is a role that will have Haze either bursting out into the big time or type cast forever as nut jobs. I'm figuring it will be a breakout role since I don't know how many people will be rushing out to see a film about necrophilia. Its a role that Bruno S, the star of several Werner Herzog films, might have taken had Herzog had made the film back in the 1970's. (Actually Herzog was someone I frequently thought of during the film. Despite being darker then Herzog's normal subjects, it shares many themes to his films)

To my mind Franco is a genius. He has managed to make an unpleasant subject likable or as likable as far as someone like Ballard goes. He has also managed to take the mad psycho based on Ed Gein story and forge it into something new and vibrant and alive. Yea we've been here before, but not quite like this.  For me seeing it was an unexpected treat because it didn't do things by rote or how Hollywood, or even many independent producers would dictate it should.

While not for all tastes, nor even most tastes this was one of the unexpected pleasures for this year's New York Film Festival. (It plays tomorrow night and Tuesday at the festival)

(For the record at the press conference Franco said that the two major differences from the book are the fate of   the stuffed animals- its never mentioned in the book; and the removal of the epilogue to the story which Franco said was something that McCarthy had put to underline his themes but didn't add anything to the story.)