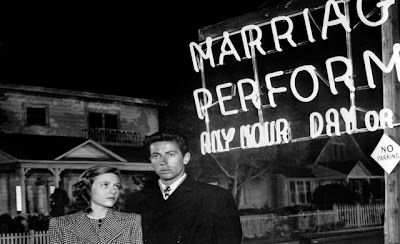 The first time I saw The Live By Night was by accident. Back in the old days of mom and pop video stores one of the ones I frequented used a number system, you told them the number and they gave you the tape. I was asking for one thing and instead I got The Live By Night. Not realizing I had the wrong film until I got home, I watched the tape. At the time the film made no impression on me other than the title stuck in my brain as something I had seen.

When this years New York Film Festival was announced I pulled out one of my Warner Noir sets and gave it another go.

More doomed romance than crime drama the film follows Farley Granger. He's a young kid who breaks out of prison with two other bad guys. When they hide out with oHoward DaSilva's brother Granger meets Cathy ODonnell and the pair fall hopelessly in love. Hoping to score enough cash to get away a few more jobs are pulled. Granger eventually takes off with ODonnell hoping to disappear into wedded bliss, however his one time partners come looking for strong arm him into pulling more jobs- and the karma he sewed by being part of his partners bad moves.

I'll leave others to talk about the films historical significance, its the first film of Nicholas Ray, it has a historic use of  a helicopter and it has a few other notes of importance. For me I'll just talk about the film- This is a bleak black noir that is exactly the sort of poison pill to make you feel hopeless. The world is stacked against us and we are almost better just to go along with the muck and mire. When the film was done I wanted to slit my wrists.

Actually I'm overstating the case. to be honest  the one mitigating factor in the completely hopelessness of the film is that  as nice a guy Granger seems to be, he is ultimately a bad guy.  Sure we never see him kill anyone but he pulls the jobs, he beats up a man in the street, he was in prison for murder (he claims just to have just went along on a robbery that went wrong and didn't run when the cops came). Granger isn't your typical good guy who makes one mistake and has his life go to shit, instead he's a stupid guy who keeps doing the wrong thing over and over again. I'd really feel bad except Granger refuses to get off the road to ruin except when its way too late. Yea he's a sweet guy but he's still kind of deserving of the hell fire he brings down on himself.

While I may not have wanted to slash my wrists at the end I was rather depressed. This is a solid little film noir.

If you like noir, or if you want to know what noir is about and you can make the screening on October 5th I recommend you get a ticket and see this film on the big screen at the Walter Reade.
Posted by Steve Kopian at September 24, 2013