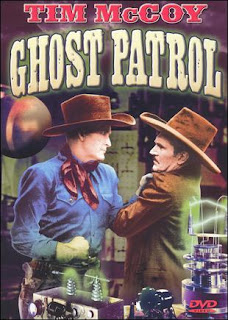 Tim McCoy is a government agent looking into how various mail planes are being knocked out of the sky. Pretending to be an outlaw, he and his buddy end up battling crooks with a spectacular ray that shorts out engines.

This brief little western is an okay time killer. It would be better if it didn't have as many stretches of watching the planes falter in the air or guys riding horses. Its an odd mix of "now" and old west with radios, planes, and the typical western stuff so that it some who seems anachronistic. The acting is good, especially when it comes to Tim Mc Coy's hat which is so huge that it borders on parody (If most hats are ten gallon, this is 100). Actually the cast is pretty good since its packed with character actors from top to bottom.

If you run across I'd give it a shot on a slow night. If nothing else its a movie to pick apart for numerous continuity errors and weird shifts in logic.(for example- why do they keep flying over the same place when planes are always crashing there?)

And while you're at it see if you can make sense of the title when compared to the actual content of the film.
Posted by Steve Kopian at September 20, 2013