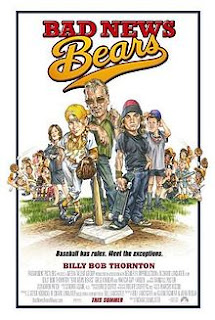 Richard Linklater's updating of the 1976 classic film is an odd beast. At times faithful, at times not, this film has no real reason to exist except that its very very funny at times.

The basic plot, of a drunken coach taking on a team of losers and misfits is pretty much the same, even many of the jokes are the same. The team make up has been altered slightly, though there still is Tanner who appears not to have changed in 25 years and will still take on the sixth grade single handedly, there still is an overweight Engleberg to be his foil and of course there is a girl to be the star pitcher. Here she's played by Sammi Kane Kraft, who looks and acts like a 12 year old tom boy, better than Tatum O'Neal ever did. Frankly she's someone to look out for down the road.

What intrigues me about this movie is that it has other things on its mind other than being funny. There are attempts to look at parent child relationships, race, and what it means to succeed or fail in life. While some of the additions make for a very bumpy ride, they are at least an attempt at doing something other than a straight remake with the material. (I'm curious as to what was cut and if any missing or extended scenes will show up on the DVD)

Its not perfect, but who cares since ultimately its very very funny. Some of the jokes worked the first time, while others could only be done now. It amused me for two hours more than many films I've seen lately and I did hurt myself laughing on an occasion or two. Do you need to see this on the big screen? No, TV will be fine, since its probably going to end up in eternal rotation much like the first one.

In the end the question of which is better does go to the first one, but that doesn't mean you shouldn't see this one too since it has some really big laughs to offer and will, in the end make you smile (even if it can never erase the image of the original).