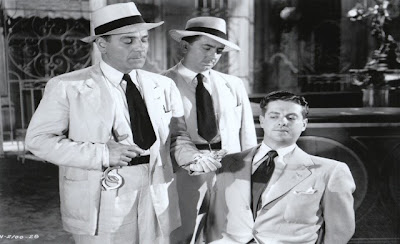 When is the New York Film Festival going to go whole hog and do a whole sidebar of film noir? Every year they play a couple, but they never do what they should and just go whole hog. Then again maybe the Film Society of Lincoln Center should just do a week or two of Noir films and really get New York properly moody.

The reason I'm mentioning this is is because between yesterdays The Live by Night and todays The Chase they have a mini noir festival going on.(You can even throw in Try and Get Me for a neat triple bill)

An adaption of Cornell Woolrich's The Black Path of Fear, The Chase stars Robert Cummings as a down on his luck vet who finds a wallet outside a restaurant. Taking out just enough money for a meal he brings the wallet back to it's own and is rewarded with a job as a chauffeur. Little does Cummings know is that his new boss is a psycho gangster who likes to mess with people, he has the ability to drive his car from the back seat and he's keeping his wife prisoner. When his boss's wife asks him to buy two tickets to Havana he does so and sets in motion a series of events involving murder and mayhem.

Actually what transpires is a series of events that take a turn for the strange after running for two thirds of the running time. Actually they take the sort of turn that may have you scratching your head and wondering what drugs the filmmakers on (in their defense, according to the NYFF website the source novel is even more loopy)

Despite the film getting a brand spanking new restoration I'm kind of hard pressed to see why this film is playing at the New York Film Festival. This isn't to say that the film is bad, it's not, its turn your brain off and go with it sort of a film. Its a classic popcorn film where you're never ever going to guess where this is going until almost the end. The problem, aside from Cumming being a bit too light weight for the lead role, is that things are so out there (I'm still not sure where there is) that you can't fully take much of what happens seriously.  Key to the problems is there isn't enough interplay between Cummings and the wife to make it understandable as to why he would risk his life to take her to Cuba. Watching the film you accept it because not to stops the film in its tracks, but it's still a nagging question.

Still should you have the ability to see this on the big screen on October 9th you may want to consider going. Even with my reservations I'd consider going, except I'm going to see Tim's Vermeer which is screening in the theater next door.