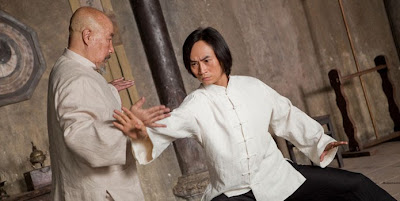 Luck was with me when I saw THE MAN OF TAI CHI. (MOTC) First I made the screening with enough time that I had my choice of seats. Secondly when I arrived I discovered quite to my complete delight that Hubert Vigilia and Peter Gutierrez were in the theater as well. Under normal circumstances they are excellent movie company, however when seeing a throwback balls to the wall zero pretensions film like MOTC they are just about as good as it gets in company (the only thing that would have made it better would have been the inclusion of Mondocurry, Mr C, Chocko and the rest of the Unseen crew and lots of popcorn and drinks.)

The plot of the film has Tiger Chen, the only student of a master of Tai Chi who lives in an ancient temple getting mixed up with Keanu Reeves and his underground fighting ring. Reeves had seen Chen fighting in a martial arts tournament and decided to recruit him for his deadly competitions. Falling down the rabbit hole Chen soon finds himself becoming a better fighter but inching closer to the dark and deadly side in order to stay alive. Meanwhile a police inspector played by Karen Mok has hit a brick wall in her investigation into the fighting ring after her informant disappears..

Okay, let me be completely honest up front, almost none of this makes a lick of sense and Keanu Reeves is often (intentionally) laugh out loud silly, but at the same time this is probably the popcorn film of the fall. It’s a blast. Its a glorious send up of the sort of western martial arts film Reeves probably grew up on, except with a modern sensibility and some kick ass Hong Kong style action. Taken on it's own terms its complete and total mindless fun. Its so much damn fun that I really wish they had allowed popcorn in the screening room because this film is very much the very definition of a popcorn film.

Seriously this is a throwback to the old martial arts films of the 1980’s that studios like Cannon used to throw out with regularity (Enter the Ninja anyone?) or even some of the weird films that Jean Claude Van Damme turned out early on. It has weird evil plots, martial arts mysticism and a few moments that are screamingly funny for the "wrong" reason. I say "wrong" in quotes because I think in making his directorial debut Keanu Reeves gets so much right that the WTF moments, like his full face scream at the camera that had the audience falling on the floor laughing, had to be intentional. If I didn't know better I would swear that Reeves wants to make such a non-think pretension free film that he put these speed bumps in intentionally. You can’t take the film seriously on any level but a fun one because he didn't and we’re so much better for it.(I'm convinced this was made to have a good time).

I loved the action, which considering Woo-ping Yuen was the action director shouldn't be surprising. The fights are both exciting and WTF. I mean how does the guy end up behind Tiger in his first fight? I love that the fights are done so that they fill the screen and that we see the entire bodies of the fighters, something most Western action films never do. There clearly is wire work at times, but at other times you can’t be sure.

Watching the film I was reminded by the vastly inferior RAZE which played at Tribeca and which shares, kind of, a similar plot. Where RAZE has fights in enclosed areas that we can’t see what’s happening and are repetitive, here Reeves bumps up the fighting space and rarely repeats himself. (I should also mention that this film is much more fun than Rza's  much too serious MAN WITH THE IRON FISTS)

Say what you will Reeves could very well have directorial career ahead of him.

A must see- and see  and see again especially if you like those weird martial arts films of the 80's and 90's (those of us who've seen it are already planning a trip to see it again when it hit theaters)
Posted by Steve Kopian at September 10, 2013