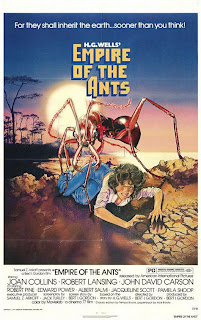 If you seriously think that a film called Empire of the Ants is not going to be a schlock film, you need to have your head examined. Actually if you expected anything other than a paycheck movie for it’s stars you need help as well.

On the other hand if you look at the title and realize what you’re getting then there is nothing wrong with you and feel free to pull up a seat next to me.

Allegedly based-very loosely-on an HG Wells story, ala Food of the Gods, this is about a Robert Lansing and Joan Collins taking suckers into the everglades in order to have them buy into a real estate scam. Unfortunately the site has been taken over by giant ants who are using brainwashed humans in order to help them take over the world.

Do you really need to know than that?

The effects are adequate, a mixture of large models and macro filmed real ants via Bert I Gordon’s patented techniques. The cast sells it as best they can.

This is a goofy movie that’s perfect for a night on the couch. It is what the title implies it is and not much more, which means it’s enjoyable fluff. 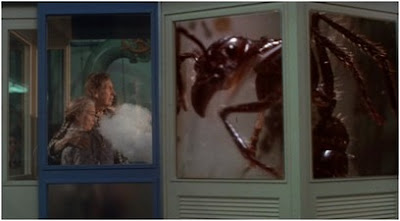