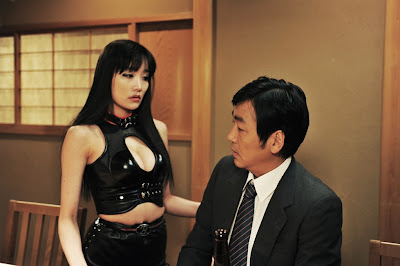 HK is now joined by R100, the latest feature directed by Matsumoto Hitoshi, which finds the well-known comedian provoking audience reactions as much as in his previous offbeat comedies, this time around under the auspices of its suggestive subject. It tells the tale of a man who hires the services of an underground s&m club, which promises to send dominant call girls to wherever he may be to provide erotic stimulation - the sort that would turn on a masochist craving abusive treatment.  What goes for abuse turns out to be rather enlightening. Aside from your standard physical interactions, like a knee to the groin, it turns out that breaking an appointment or showing up unexpectedly are also valid forms of humiliation.

In a turn not unlike the bleeding of fantasy into reality in Fincher’s The Game, the services being rendered begin to encroach on the main character’s personal life, take on life threatening proportions even, and the only apparent way out is a battle between him and the mysterious club, complete with secret agents and larger than life criminal bosses. 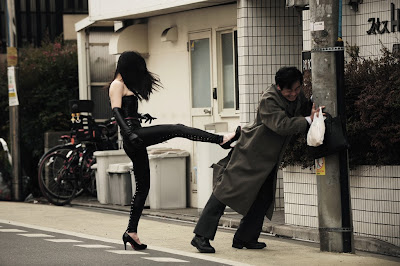 This sounds like it could be a serious psychological thriller. And it is shot in surprisingly effective noir-ish tones, full of dark grays and subterranean shadows. Yet despite Matsumoto’s persistence in keeping a straight face, the proceedings are far from serious.

The joke begins with the title, which asserts that the film’s suggestive nature is too mature for audiences under 100 years old. The notion of a film being more erotically charged than any other when it does not contain one split second of explicit sex is deadpan humor in itself. And yet, something does seem to ring true of an awkward strain that this abstract kinkiness puts on the population’s psyche.

A favorite scene of mine comes early as the man dines in a sushi shop. As his delicately crafted course is presented to him, one of the latex clad agents of the club squashes each exquisite roll under her palm, forcing him to eat the ruined morsels. It is as bizarre as it is ridiculous, arguably inoffensive, yet it causes the other diners to shift in their seats in quiet discomfort. On he surface it’s simply the best sort of awkward humor that defies a logical punchline. However, look a little deeper it seems to say something about the strange relationship between the famously reserved culture of Japan, where open disapproval or criticism is not the norm, and this increasingly prominent subculture of abnormal sexual desire.

This is not the only place where Matsumoto’s inscrutable sense of humor proves to be a charm for some while probably exasperating others. His sensibilities lay somewhere between subtly clever instigator and a weirdly out of touch uncle insistent on making corny jokes. As for the former, the film is as self-referential as one can get, from its onscreen director’s career choices paralleling those of Matsumoto himself, to sudden lapses into mockumentary interview mode, which viewers of his notorious debut Dainipponjin will be familiar with.  Before you can criticize the film’s plot holes or gaps in logic, Matsumoto beats you to the punch with a clever framing device that shows the film we thought we were watching to be something like a test screening of the abovementioned fictitious auteur’s latest work. The producers or distributors watching along with us are already there with plenty of issues with the film’s logic. R100 doesn’t just break down the 4th wall, it kicks up its heels in the rubble. 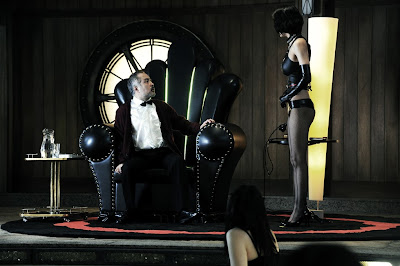 And yet the director can’t help but throw in a generous helping of gag humor, still moderate in comparison with Dainipponjin’s excess. It works well here, as it speaks to the eroticizing of some of the most physically off-putting behaviors imaginable, sending the aforementioned subtlety packing.

Perhaps Matsumoto perceives himself as the hapless goofball, at least to some extent. There is a definite theme running through his work, which builds stories around crestfallen men in the unglamorous 30 and above demographic. Of all these films, the protagonist of R100 is perhaps the most grounded in reality: a furniture salesman raising a son on his own and forced to stand by helplessly as his wife, stricken by illness, whiles away on life support. Through all the offbeat humor, our attention keeps being turned back to this sympathetic figure (played by Nao Omori, who’s acted in Fish Story and Ichi The Killer among numerous other impressive features), not unlike the despondent would be warrior figure of his previous film, Scabbard Samurai.

When the film builds toward its conclusion of escalating over the top action and absurd humor, it goes over the edge like a barrel flying over the side of a waterfall. An all too conveniently placed stockpile of weapons allows the protagonist to fight back against a killer elite squad of dominatrices. It’s ludicrous enough to make one’s eyes roll if one doesn’t appreciate the fact that Matsumoto is doing this all with a wink and a nudge. Soon, that consistently moody film quality is lost in a haze of horribly cheap looking CGI explosions. Could it be a statement on the inanity of big budget action films? Or merely a reminder that Matsumoto doesn’t do action films – although he’ll gladly and boldly go where he has never gone before, even if it means fumbling about wildly.

As for the film’s final statement, it is a bold one, both visually and thematically, that looks to achieve a more universal message of acceptance than just the struggle of Japan’s unsung male figures. I’m not sure it clasps the entire experience together as a cohesive whole, but the film is made up of so many fantastic and fantastical moments, it’s nothing to get hung up about.

R100 received its world premiere at the 2013 Toronto International Film Festival and screens in theaters in Japan beginning October 5th.  Keep an eye out for more activity around this bizarre film.