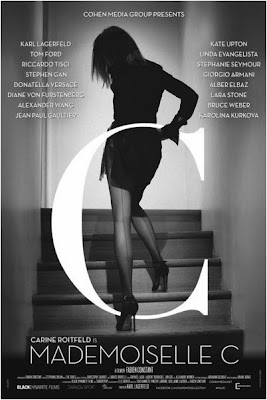 Former Vogue Paris editor-in-chief (and current global fashion director for Harper’s Bazaar) Carine Roitfeld tries to define what she does for a living in the opening minutes of director Fabien Constant’s Mademoiselle C. In French (subtitled in English), she says she’s a “stylist,” “fashion editor,” and “image maker.”

That’s about as close as Constant ever lets his audience gets to knowing who Roitfeld really is. For a documentary that obviously had intimate access to its subject, we never actually get close to her.

Following Roitfeld as she plans to launch her own magazine, CR Fashion Book, there are a few things the film does right. It does show the often tedious days of going from runway show to runway show (always in heels! Always!) and it actually makes it look like work rather than play. The day-to-day stuff with the magazine shows fleeting glimpses what it must be like to plan, edit, layout and publish such a huge undertaking from scratch (true to its name, it’s more a book than a magazine). That’s what film need to focus the most on.

But those elements make up a scant several minutes of the documentary’s 90-minute running time. The rest of it is spent being in awe of Roitfeld without ever explaining why we should be.

While she lives in a privileged world full of celebrities and designers, she does seem kind and loving enough. Even if she doesn’t live in the real world, she rarely comes across as clueless or entitled. She’s clearly a smart, driven woman who can obviously be very charming. She really shines in the genuine moments she’s allowed -- when she’s smiling about being some designer’s muse, her excitement over camera flashes even when they’re not for her, and her comment about how “the vodka relaxes you so you’re not afraid” before heading out to the public. Those bits reveal a woman I’d like to know.

But the rest of the film just seems like a long parade of ridiculous fashion shoots and celebrity cameos. Constant seemed too preoccupied with the glamorous life his subject was leading to focus on her. Any conflict is sort of waved-away -- they’re running out of money for these shoots? No big deal. Publishers are upset she’s starting her own magazine? Whatever. Those are just distractions between the exclusive parties Roitfeld gets to go to.

Even parts that seem to be there to make us see what a wonderful person she is feel a bit forced. I have no doubt Roitfeld dearly loves her children (and her pride at her granddaughter is beautiful) and her life partner, but none of those scenes made me feel like I knew her any more than I did before. A too-long sequence of Roitfeld doing some kind of in-home ballet workout was probably supposed to illustrate her dedication and determination but instead just reinforced her life of luxury. After awhile, such scenes felt tedious. She’s rich and important. I get it.

After too many people singing Roitfeld’s praises and talent toward the end, it just came across like Constant wanted us to know what he couldn’t find a way to actually show in his film. Even after watching her for 90 minutes, I still have little clue as to what Roitfeld does or who she actually is.

I imagine looking at an issue of CR Fashion Book may tell me much more about her than this Mademoiselle C did.
Posted by Eden at September 11, 2013