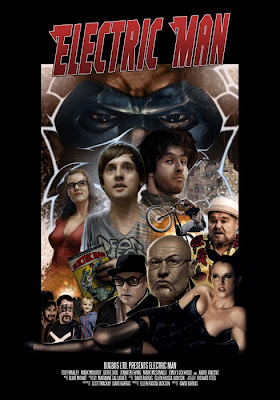 David Barras's ELECTRIC MAN hits DVD Tomorrow (and FilmBuff's VOD is October 15). It's a micro-budgeted caper film concerning a comic worth a £100,000 and the crazies who want to get their hands on it. in the promotional material as Clerks meets the Maltese Falcon. I'm not sure that the description is apt except in the most general of  ways.  To me this is an amusing little caper film that is probably a bit too long, but at the same time it's an enjoyable romp if you forgive its short comings.

The plot of the film is set in motion when an eccentric comic collector is killed by his brother so it looks like suicide. He wants to get his hands on his copy of Electric Man #1  which is worth £100,000 and sell it to an obsessive Electric Man fan. The plan goes wrong almost instantly as the comic ends up at a comic shop that is desperate need of repairs. The owners see it as way to get out of the financial hole they are in Events then begin to spiral out of control as everyone begins to try and get their hands on the comic.

Okay lets get a couple of things out of the way. The reviews that came out of the UK were mixed- some people loved it and some people didn't. I mention this because just after the film was offered to me for review and said I'd take a look, I was told some very mixed things about it by a friend. It was one of those moments where I wondered if I should have said yes.

Now having seen the film I can honestly say that it's a good little film, flawed to be sure, but as an evenings entertainment it's not bad.

The problems with the film comes not from the micro-budget (truthfully the film doesn't look like it was made for no money) or the performances which are very good (actually they are good enough that they put the film over), the problem with the film is the script which tries to mash too many things together into one film as if director/writer Barras was trying to get everything into his one shot at making a movie. With the script going all over the place from comedy to caper to romance to Guy Richie homage and back again Barras never manages to find the right rhythm or pacing for the film. sequences run on too long and in a couple of sequences the comedy falls flat as the humor seems forced.

But does that make the film bad?

Oh hell no. Actually the only real complaint I have is that's its too long at 100 minutes.  so that by the time the film ends its meandered to a stop rather than come to a conclusion even if it puts a smile on your face.

To put it another way this another of the small films that Unseen was started to highlight. This is a small film, that odds are no one is going to notice, which has a great deal going for it and very little visibility. This is a film that deserves to be seen by more than say a film festival audience or the critics who were directed it's way PR people.

As I said above the cast is really good and they manage to sell the story and hold it together much more than the script should allow them to.

And despite my bitching about it the script does have several really good bits. I love the opening in the bar where the guy comes up behind Uncle Jimmy with a baseball bat. There is this wonderful sense of "what have I just put on and where is this going" that even most more polished films never achieve. The romances between Wolf and Jazz and the women is frequently spot on. There are also the surreal moments where various characters show up costume that keep the film feeling more than your typical micro-budgeted or inde film

Another high point is the score. How the hell did such a good sounding score end up with such a small film as this?

A small treasure is the animated opening titles. They kind of make you wish that the film was the story of Electric Man instead of the story of his comic book.

I like this film. Is it the be all and end all, no, but it is a film that is worth your time. If nothing else I'm guessing that this maybe the sort of film where down the road you see someone up and coming and realize that you saw where it all started.
Posted by Steve Kopian at September 09, 2013