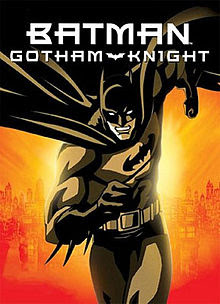 The stories are written by David Goyer, Greg Rucka, Brian Azzerello and some other names you may know. The some of the voices are from the animated TV series. The directors are mostly first timers with two exceptions Jongisk Nam worked on The Masters of the Universe while Hiroshi Morioka directed the Tsubasa Chronicles and assisted directed on Two of the .hack series and Madlax.(All of the directors have worked on some of the best anime around so they maybe directing for the first time but they all know what they are doing). What the mix produces is a killer group of stories that result in a thought provoking tale and character study of both Batman and Bruce Wayne.

The first story is Have I Got a Story for you and it concerns some skateboarders trying to determine what Batman is. Yes its like the Dark Knight Episode of the TV show-but its in a style that looks like Tekkonkinkreet. It has its moments.

Crossfire has two cops, one of which doesn't trust Batman, getting caught in the cross fire of a mob war. The images will blow you away.

Field Test is about Bruce testing a device which will deflect bullets. Possibly the weakest of the stories as a stand alone.

In Darkness Dwells- It appears that Killer Croc and the scarecrow have kidnapped a cardinal and taken him into the underground. It looks like Mike Mignola meets anime. With some of the best visual and emotional moments in any Batman movie. The image of the Scarecrow is truly scary.

Working Through the Pain- As a severely wounded Batman staggers through the sewers he remembers back to his days being trained- particularly to the woman who taught him to work through the pain.

Deadshot-The assassin Deadshot is hired to take out Gordon. Okay story alone is a nice cap on the six tales.

At first I thought the film was going to be all visuals and little story, however once things got going the film actually began to turn into something much more. I'm finding its bouncing around in my head the way good movies do. Its actually good enough that I'd really like to see another one down the road since the stories are nice additions to the Batman canon of tales.