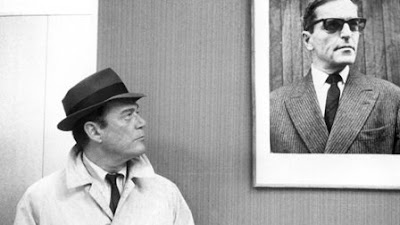 Starting as part of this year’s New York Film Festival and continuing after the festival The Film Society of Lincoln Center is running a retrospective of the work of that master of the avant garde cinema Jean Luc Godard. One of the titles playing during the festival is restored version of Godard’s Alphaville, which is probably the only Lemmy Caution film that most film fans have seen.

I'm not a Godard fan. I think his time came and went and he was (and is), for the most part, a good film maker who thought he was smarter than he really was. Still he turned out some good movies along the way and this is one of them.

Taking the Lemmy Caution character, played once again by Eddie Constantine, Godard has fashioned an existential or philosophical detective movie about Caution trying to track down a missing scientist in a future world that looks like 1968 Paris. A strange melding of detective films and philosophy this is a movie that is very likely to drive many people up the wall because of Godard's film making style which is filled with seeming non sequiturs and distractions that force you work with the film. Muddying things further is that much of the dialog seems slightly obtuse even when its straight forward because what’s going on visually doesn't quite match up (For example a girl says she'll get the keys for the car and then they get into the back of a limo).

I like the film a great deal (and as frequent readers of Unseen Films know I’m a big fan of the Caution films I've seen) but find the weird asides a bit of chore to get through. If Godard wasn't so intent on making an "art" film he might have turned out a really good straight forward thriller all he had to do was keep the discourse and lose the obtuseness. I love the philosophical discourses that run through the film, some of which are quite enlightening even if they are utter nonsense. The best way I find to watch the film is to concentrate on the story and let the rest wash over you. As a thriller it’s actually really good.

I should also point out that I’m pretty sure that Constantine and Lemmy Caution influenced the Jean Paul Belmondo character in Breathless. If you watch some of the more serious Caution films (of which Godard is a fan), or even the many of the serious Constantine films you see that while lip rub comes from Bogart, the rest of the characters attitude is all Eddie Constantine.

Is this worth seeing? Yes. If you are willing to take this film on its own terms its certainly worth it. It’s also worth it if you've seen and liked any of the other Caution films and want to see what happens when they get turned into an art film.

For those wanting to read Unseen’s reviews of the other Lemmy Caution films go here.

The film is available on DVD from Criterion. However this is a new restoration and is worth seeing on the big screen.
Posted by Steve Kopian at September 26, 2013