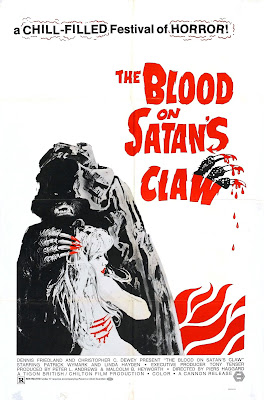 Legendary 1970's horror film was one that all the kids I knew wanted to see in the theater whenever it was rereleased because the TV version was obviously cut. Of course our parents wouldn't take us because the film was rated R but we would dream of the nastiness in the uncut version.

By the time I saw the full uncut film it was several decades since I saw it cut up on local TV on a Saturday afternoon. I was far enough on that I don't really remember what the differences were  or what I was expecting. I think it was more blood and more breasts, probably more scares.

The plot has a farmer plowing a field and unearthing the remains of one some creature. (I always remember the eye). Soon after that people begin to grow strange claws and the children begin to turn evil as if under a demonic force.

One of the spate of witch films that filled the early part of the 1970's (Witchfinder General, the Mark of the Devil films) BLOOD ON SATAN'S CLAW is one of the better of the bunch. More interested in plot than shocks and torture (like Mark of the Devil), the film has a nice oppressive feel about it. We really don't know what is going on and it disturbs us. What we do know is just as bothersome. While I don't think that there are any big scares there is lots of suspense as we wait to see how it will all play out. (And it helps that this was the 70's so things weren't necessarily going to end happy.)

While I know my reaction to the film as a ten year old is different than my being an ancient adult I still find it to me a solid piece of supernatural storytelling. I like the film, though probably not quite as much as I did when I was certain the uncut version was going to contain some unimagined scares. Is it the be all and end all? No, but it is enjoyable and recommended.
Posted by Steve Kopian at August 30, 2019