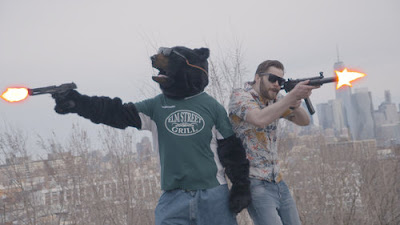 Third episode of an internet series J CITY HEIGHTS about a guy and his best friend, who is a bear, who trying to get some stolen bit coin back only to find out that there is some sort of alien conspiracy involved... maybe.

Amusing comedy is funny in fits and starts, but is the sort of thing you really need to see as part of a sequence (I should have seen the previous episodes first). There are things going on that I know are supposed to be jokes but because they seem to be situational assume I've seen the previous episodes in the series. I have not, and I suspect my lack of love for the film is a result of that.

Reservations aside this is worth a look, but this is going to play better of you see the other J CITY HEIGHTS  episodes first.

For tickets and more information go here
Posted by Steve Kopian at August 09, 2019