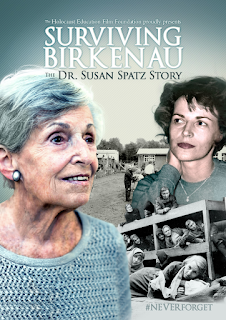 Taking a page out of the Claude Lanzmann playbook, director Ron Small sits down with Susan Spatz and lets her tell the story of her survival before during and after the Second World War primarily focusing on her time in Birkenau death camp.

Don’t come into this film looking for visually exciting images. The film is largely just Dr Spatz sitting in a chair and telling her story. It’s a tale that doesn’t need flourishes since what she is saying is so compelling we can’t help but listen. To be certain there is an occasional photograph, but mostly this is just one woman holding the floor for just over an hour.

While part of me has tired of the recounting of man’s inhumanity, I find that I am repeatedly drawn to films like this. Yes I know similar stories but I don’t know this story and as a result I have to hear the story so that the dead are remembered and know they meant something. More importantly we need to hear the stories of people like Dr Spatz frequently to remind ourselves it can happen again, and that despite the protests of the criminals in Washington lead by Donald Trump that they are doing nothing wrong, that it is in fact happening here right now.