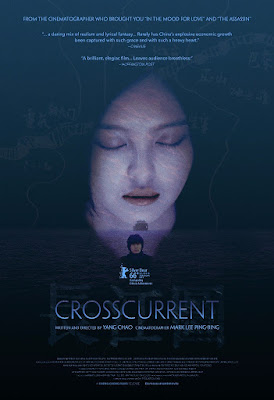 Cinematic love poem to thethe Yangtze river and to China itself CROSSCURRENT is a film that must be seen and seen on the big screen.

The film follows a sailor traveling up the river from where it spills out to where it begins.  Along the way he continually encounters women (or is it just one woman) all named An Lu who all look the same but are all slightly different.

Yang Chao had been working on the film for ten years before finally completing it. This is a film where it is all image. Very little is said and much of that has a mystical bend to it. The story is driven by the images and by the performances of the actors who manage say volumes more than any of the words could. This is a film where the actors act, not just recite words but actually act, whole bodied to create their characters. Its something that may annoy some people who don't want to have to pay strict attention to what is going on, but for those of us who liked to be drawn into a film by more than words it's a godsend. This is what great acting should be- an entire body performing.

As much as one says a film is the work of a director, here the the work of the cinematographer is just as much an author. Mark Lee Ping-Bing DOP on Wong Kar-wai’s IN THE MOOD FOR LOVE won an award in Berlin for his cinematography for CROSSCURRENT and it would be a hard choice to argue since when the film done it is the images that will hang with you. In Ping-Bing's hands the entire world is a character. We are not just traveling up a river but exploring the hidden psyche of the landscape. We feel it shift and change and become a living person as we travel through and upon it. Rarely has the imagery in a film been so vital to a story. If you had someone else shoot the film, or if you changed any of the images the entire film would be radically different or would collapse completely. I can not imagine  this film looking any other way.

I loved the film, however if you want action and explanation you are going to have a tough time. This is a film that requires the viewer to engage with it 100%. You have to give yourself over to it and let it direct you. You can't be passive rather you have to be active. You literally have to buy a ticket and take the ride up the river. If you can't handle a mystical travelogue stay away. It is a film that is going to be best viewed on the big screen in a theater where you are going have few distractions. I'm not going lie and say it will be rapturous from start to finish, it's not but the weight of the images and the mysticism will, I think move you.

Strongly recommended for anyone wanting to go up river and willing to let a film do what it is going to do. (This truly is an art film)
Posted by Steve Kopian at August 26, 2019